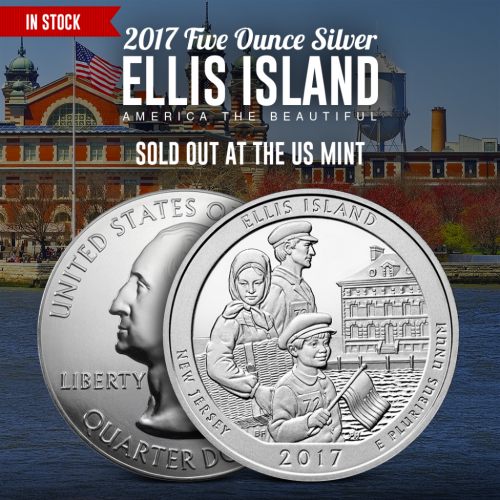 I’ve been watching the coin markets closely for the past 2 weeks to see this move. I can’t tell you how excited I am to share this with you. While I didn’t think it would happen so soon, it’s here and the time to act is short.

I have been expecting a swift hike in premiums on the brand new America the Beautiful Ellis Island coin and just yesterday I got the call I have been waiting for. One of our major suppliers called to notify me that they had less than 1,000 of these coins left. With inventory already being so low and not being able to order more from the US Mint, they apologetically notified me that they would be forced to raise their price to us here at Provident.

So What’s The Big Deal About THIS Coin… And Why Do You Need Some?

Let me take you back to the start of all this. On August 31st, the US Mint released a brief but unusual statement regarding their newly released Ellis Island 5 oz Silver ATB Coin.

See the message below: 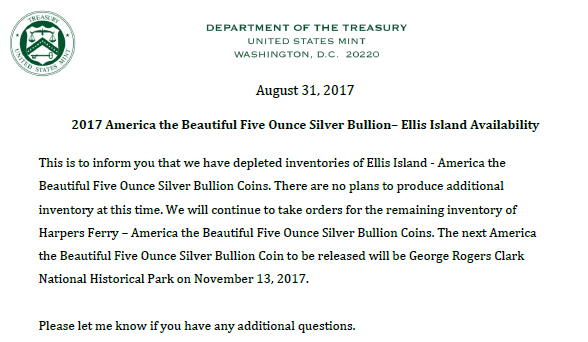 With sellouts in the ATB series becoming a regular thing, this news carries little to no significance to most. BUT, considering a few key market factors makes this coin different.

First, it’s key to note that this message from the mint came BEFORE the coins had even been shipped from their vaults. The fact that these coins were still on pre-sale and we had been told the mintage is sold out gave us our first indication that we were going to see an imbalance in supply and demand.

Over the course of the ATB series, we have seen coins jump in premium quickly AND significantly. We can even look to just April of this year and the release of the Frederick Douglass 5 oz Coin. While initially released at a modest premium, these coins have exploded in value, with most retailers now quoting over $150 and some even as high as $170 for a mint fresh example. This popularity and consequent hike in price can be attributed to a number of factors, some of which are the notoriety of the reformer and abolitionist as well as his historical significance.

Below are other examples that have performed well.

Possible demand for this coin is incredibly broad given that roughly 40% of Americans can trace their ancestry through the immigration station at Ellis Island. In fact, upon examining the list above, it’s easy to see that those more popular sites/characters have fared better through the years.

I have done some research and by my best guess, of the 40,000 total coins produced, there are less than 12,500 left unsold. This number includes what I would be able to secure today if I called our suppliers to replace any coins sold.

Now remember when I said I have been waiting for this move to happen? If being an Eagle Scout has taught me one thing, it is to “Be Prepared.”

I didn’t just think that this coin was going to begin creeping up in value; I acted on that hunch. You better believe as soon as I received that notice from the mint, I called around and locked in as many coins as I could afford to carry at the lowest premiums I could find. 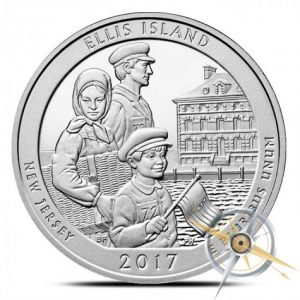 As of this morning, we have roughly 1,500 coins left in inventory with almost all of these being secured at low premiums. Once these sell out, I will be forced to get more from our supply network at higher premiums and consequently will have to raise our pricing to you.

That’s why I couldn’t wait to get this email out to you as soon as I saw the first inkling of a move.

Get Ellis Island ATBs for as low as $3.49, but Only While This Supply Lasts!

As with all of our 5 oz Silver ATBs, single coins will arrive in a protective capsule. Multiples of 10 and 100 will arrive in original US Mint tubes and/or monster boxes and will not include capsules. All coins ship direct to you as received from the US Mint. Our vault and shipping staff take great pride in delivering you the highest quality products packed quickly and securely.

Check out our entire selection of 5 oz Silver ATBs here for other information and pricing on past issues.

Until next time…stack and let stack.