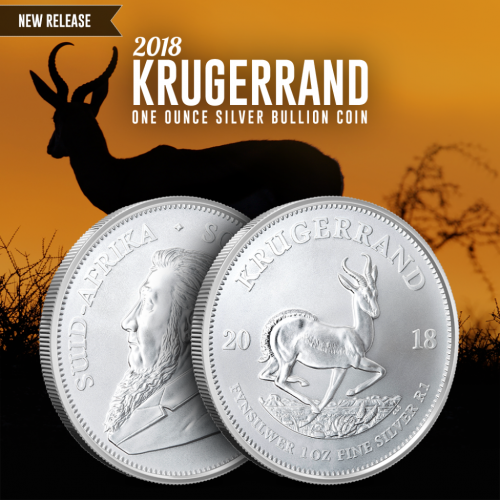 Just when you thought all the new 2018 releases had been unveiled, the South African Mint caught the industry by surprise. For the first time ever, the venerable Krugerrand is being issued as a low-premium silver coin. This coin is unique in that it’s both brand new and steeped in tradition at the same time. While this silver coin is a newcomer to the marketplace, the Krugerrand line has a reputation that spans over half a century.

When it was first released in 1967, the “K-Rand” was the very first mass-produced 1 oz gold coin. It was a true pioneer in the industry—and a wildly successful product too. In fact, during the gold boom of 1980, the Krugerrand accounted for 90% of the global gold coin market! Even though competitors like the Eagle and Maple have emerged since, Krugerrands continue to enjoy tremendous demand.

For decades, Krugerrands were only struck in gold. Then, upon the coin’s 50th anniversary in 2017, the Rand Refinery of South Africa introduced the first-ever Silver Krugerrand. This piece became an instant collector’s item; 2017-dated specimens have been trading for two to four times their melt value! Now, for the first time ever, the Rand Refinery is offering a Silver Krugerrand at a highly competitive bullion premium. 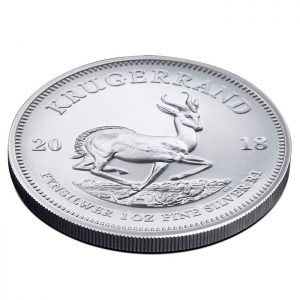 Sovereign-minted coins like the Krugerrand are universally recognized and can be easily liquidated. Their weight, content, and purity are guaranteed by a world government. In particular, the Rand Refinery boasts one of the finest reputations in the precious metals industry. South Africa has been known as a prolific gold source since the late 1800s and continues to be a major producer to this day. The Rand Refinery alone has processed nearly 50,000 tons of gold since its 1920 inception!

The 2018 Krugerrand continues this legendary tradition in a new metal. Much like its gold sibling, the Silver Krugerrand offers investors a great way to own low-premium bullion. Whereas the 2017 Silver Krugerrand was marketed as a higher-premium collector coin, the 2018 edition is priced at a slim margin over melt. Its market premium is comparable to the Silver Maple Leaf, Britannia, Kangaroo, and Philharmonic. Unlike the other sovereign coins in its class, however, the Krugerrand offers multi-generational demand and recognition. Gold investors have turned to the Krugerrand for over 50 years; now they can own this trusted coin in silver too.