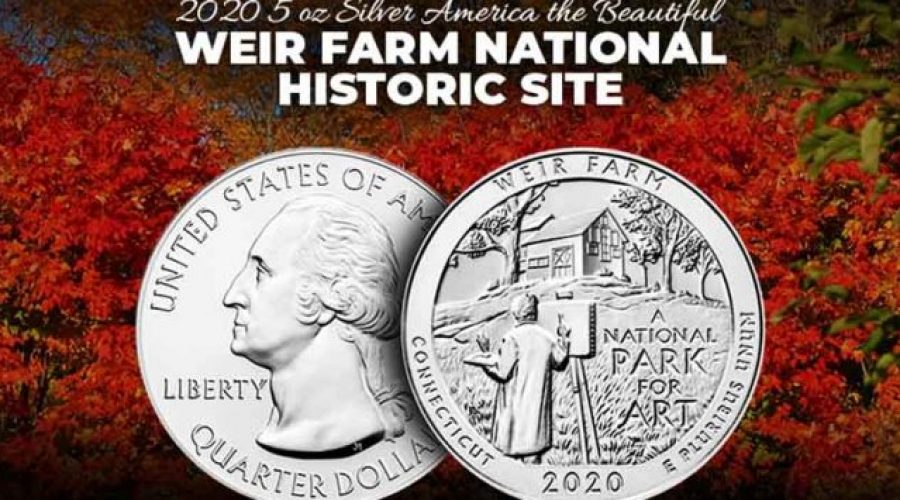 The America the Beautiful Series from the United States Mint is winding down toward its inevitable conclusion. Introduced in 2010 as a 56-coin program with five fresh designs each year, the 2020 ATB Silver coins are notable in two important ways. First off, this is the penultimate release of the series with only the 2021 ATB Silver coin to come. Secondly, as indicated by the singular use of coin for 2021, this is the final year in which five fresh designs will be available as only the Alabama coin is slated for release in 2021 to complete the collection. The 2020 ATB Weir Farm coins are arriving at a time of great demand, so there’s no time like the present to ensure your ATB collection stays on track to completion. 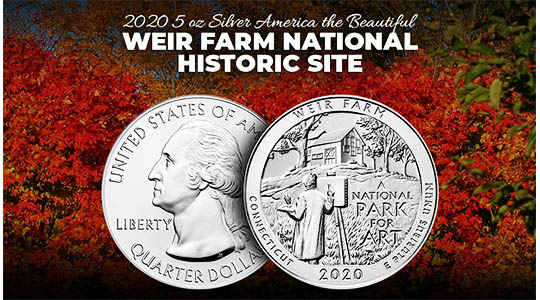 The 2020 ATB Weir Farm National Historic Site 5 oz Silver Coin is available from the United States Mint with a serene image on the reverse face of the coins. In the reverse design element, you will notice an artist diligently working at an easel in the pristine wilderness surrounding Weir Farm in Connecticut. The design element includes a rolling, grass-covered hill with a modest farmhouse and artist studio nestled at the crest of the hill near a small collection of trees. Inscriptions on this side of the coin include “Weir Farm,” “Connecticut,” “2020,” “E Pluribus Unum,” and “A National Park for Art,” with the latter inscription included within the central design element.

As with all other issues of the coin, the 2020 ATB Weir Farm 5 oz Silver Coin features the left-profile portrait of President George Washington on the obverse. Though Congress originally considered placing Washington’s bust on the Walking Liberty Half Dollar only in 1932 in place of Liberty to mark the 200th anniversary of his birth, it was decided to make President Washington a permanent fixture on the US Quarter instead to replace the suspended Standing Liberty design that had ceased production in 1930. John Flanagan designed the bust seen here in 1932 for the quarter. Inscriptions on this face include “United States of America,” “In God We Trust,” “Liberty,” and “Quarter Dollar.”

When the 2020 Burnished ATB Weir Farm 5 oz Silver Coins releases later in the year, you will find each coin individually housed inside of its own protective presentation box with a Certificate of Authenticity included. The burnished coins have matte elements throughout and a “P” mint mark from the Philadelphia Mint on the obverse field behind President Washington’s head below the inscription of “In God We Trust.”

Weir Farm started out as a place of solitude for American impressionist painter J. Alden Weir. He had originally sought out land in neighboring New York state, but eventually purchased 153-acres of farmland just across the state border in Fairfield County, Connecticut. He paid just $10, and gave the seller a painting, for the land. He went on to establish a home and artist studio on the property that he would use for his own source of inspiration and quiet working space, while also hosting some of the other notable artists of his era for short- and long-term stays. Weir Farm National Historic Site, along with Saint-Gaudens National Historic Site, mark the only National Park Service sites honoring the visual arts.

Sales of silver bullion have skyrocketed in recent weeks and pushed demand well beyond supply at many mints. The United States Mint announced that its available 2020 American Eagle 1 oz Silver Coin supplies have been temporarily exhausted and the available 2020 ATB American Samoa 5 oz Silver Coins have sold out at Provident Metals. The ATB Weir Farm coins are expected in our vaults on or around April 9, 2020, so there’s no time to waste in acquiring your next ATB coin. Please direct any questions to Provident Metals’ customer service team at 800-313-3315. We are also available on the web through our live chat and email address.

We encourage you to follows us on Facebook for daily updates and spot price contests, and follow our blog each week for more in-depth information.