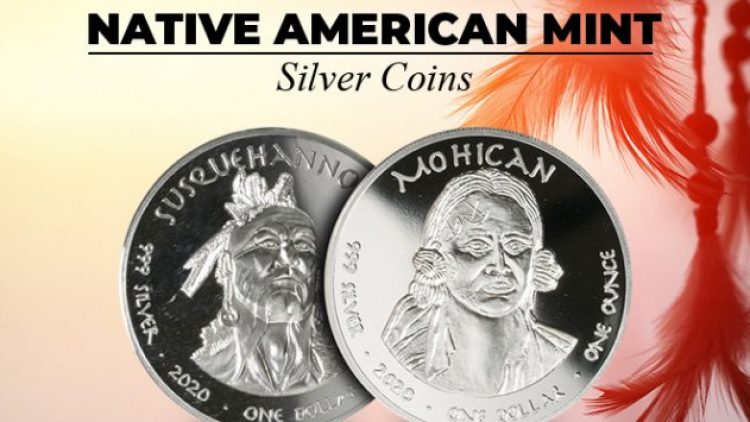 There’s a state silver coin series available to investors and collectors, and no it’s not the America the Beautiful Series. Starting in 2015, the Native American Mint and Jamul Sovereign Nation began issuing a collection known as the Proof State Dollar Series. The series offers five new designs for each date mark representing a different indigenous tribe on the obverse and a unique animal species on the reverse. The third and fourth designs in the Native American Mint series of silver is now available to you for purchase online at Provident Metals. 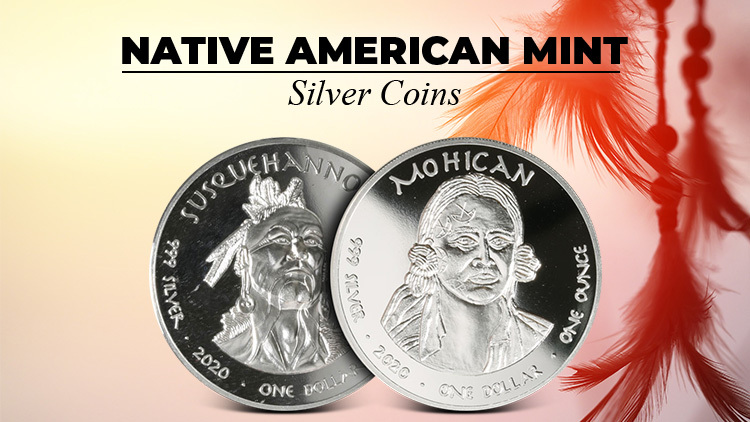 The proof silver coins are available with 1 Troy oz of .999 pure silver per specimen. Each coin is a satin-like proof that has brilliant, mirrored fields with soft, frosted design elements. The obverse always features the bust of an indigenous figure and the reverse an image of an animal species from various regions of North America. The coins are offered individually inside of protective plastic capsules whether you purchase one coin or several of each design.

The third release of the series is the 2020 Proof Maryland Susquehannock Albatross 1 oz Silver Coin. On the obverse of the Maryland Susquehannock Albatross coin is a depiction of an indigenous figure from the historic Susquehannock tribe. This individual has a stoic look on his face as he gazes directly at the viewer. His hair trimmed to a small Mohawk-like patch at the top with feathers woven into both the hair at the top and back of his head. He also wears ornate earrings. Inscriptions on this face read “Susquehannock” at the top, with “999 Silver,” “2020,” “One Dollar,” and “One Ounce” around the remainder of the design edge from left to right.

The reverse side of the Proof Maryland Susquehannock Albatross coin depicts a large albatross in the foreground with four others in the distant background. The birds are shown flying above the waters of the Chesapeake around coastal Maryland. Inscriptions on this side include “Maryland Albatross” at the top and “Jamul Sovereign Nation, America” at the bottom.

History of the Susquehannock

Today, there are few if any individuals who still identify as strictly Susquehannock. Before the arrival of the French and British in North America, the Susquehannock were a powerful tribe in the mid-Atlantic region of the Eastern Seaboard. The tribe controlled lands from southern New York and southeastern Pennsylvania down through Maryland around the Chesapeake Bay. The early interactions of the tribe actually came with Swedish and Dutch explorers and traders. One of the first tribes to acquire firearms through trade, the Susquehannock thrived amidst a pressure cooker that saw the tribe’s lands surrounded by other larger, powerful tribes such as the Cherokee, Shawnee, and Iroquois.

For the fourth release in the 2020 schedule, the 2020 Proof Massachusetts Mohican Wild Turkey 1 oz Silver Coin offers depictions of another common wild species of North America and one of the historically powerful tribes of the northeastern United States. The obverse of the Mohican Wild Turkey silver coin features the image of a Mohican tribal figure with braided hair at the sides and ceremonial paint on the face, cheeks, and chin. Inscriptions here include “Mohican” at the top of the design field, with “999 Silver,” “2020,” “One Dollar,” and “One Ounce” inscribed along the remainder of the design field’s edge from left to right.

On the reverse side of the 2020 Massachusetts Mohican Wild Turkey silver coin is a depiction of two wild turkeys. In the foreground, a female wild turkey walks in front of a male Tom in the background. In the wild turkey species, the male has the beautiful tail plumage and uses it to attract a female as a mate during mating season. Inscriptions on this side of the coin read “Massachusetts Wild Turkey,” “Jamul Sovereign Nation,” and “America.”

History of the Mohicans

The Mohican tribe once controlled large stretches of land along the Hudson River Valley in eastern New York, as well as roughly one-quarter of what is now western Massachusetts. The tribe’s ancestral lands include small portions of southwestern Vermont and northwestern Connecticut. Prior to the American Revolution, the Beaver Wars saw the Mohicans lose their substantial lands along the upper tidal range of the Hudson River Valley in New York. The American Revolution’s outcome in the favor of the colonists saw the tribe squeezed in its lands in Massachusetts, Vermont, and Connecticut to the point that most members of the tribe moved west to western New York to join the Iroquious Oneida on a reservation there. Later on, the American federal government would forcibly remove the Mohicans to a reservation in Wisconsin. With some 3,000 tribal members today, the vast majority of living Mohicans reside in Shawano County, Wisconsin.

Status of the Proof Coins

The Jamul Sovereign Nation is an indigenous tribe located in Southern California that is federally recognized by the United States government. While all federally-recognized indigenous tribes are granted independent governance of their land and people, the tribes do not have the authority to issue legal tender currency. Federal law grants that power only to the United States Mint, with Congress approving denominations and values. However, the Jamul Sovereign Nation and Native American Mint nonetheless issue these Proof State Dollars with a nominal “One Dollar” value on behalf of the represented tribes in the series.

The Proof State Dollars Series is as diverse and unique as the US Mint’s America the Beautiful Series, with a design release for each state in the Union and the many indigenous tribes that have called North America home for thousands of years. If you have questions, Provident Metals is happy to assist. You can call us at 800-313-3315, chat with us live online, or email us directly. Please follow us on Facebook for regular updates and spot price contests, and check back with our blog on a weekly basis for in-depth looks at existing and upcoming coin programs.