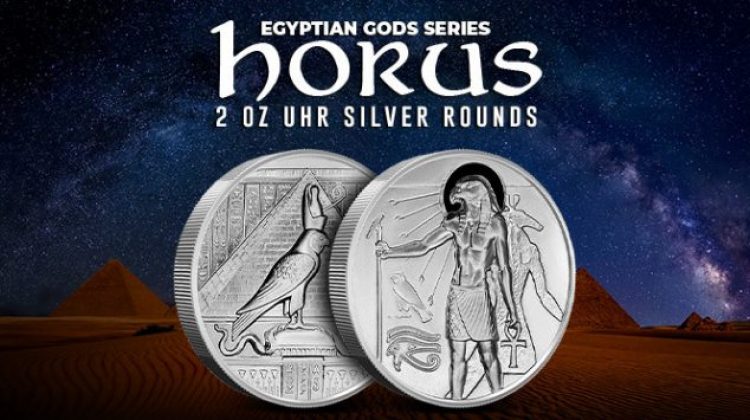 One of the most exciting launches in recent years was the resumption of the Egyptian Gods Series. This 2 oz silver round collection offers BU rounds and Antique rounds, with each design struck in high relief on the blanks. After four initial releases, the series paused. Recently, the program resumed with the same approach to production, and the original designer, Heidi Wastweet, returning to produce the new images of Egyptian deities for the series. The latest release, and seventh in total, is now available with the 2 oz Silver Egyptian Gods Horus Round.

On the obverse side of both the 2 oz Silver Egyptian Gods Horus Round and the 2 oz Silver Antique Egyptian Gods Horus Round, you will find the figure of Horus as the primary design element. In the foreground, the masculine figure of Horus is shown with the traditional falcon head that represents Horus in Egyptian hieroglyphs. His right-hand clutches a staff as his left-hand holds the Ankh symbol, a sign representing eternal life. In the background, Horus’ enemy, Set, is captured in silhouette as an opposing figure to the life offered by Horus. There are also two important hieroglyphs on this side representing Horus. The first is the falcon, while the second is the famous Eye of Horus.

Throughout the Egyptian Gods Series, the designer has featured a pyramid in the background and depicted the animal form of the god as the primary design element. In this case, Horus is shown in the form of a falcon in right-profile relief with the pschent, a double crown that represents the rule of the pharaohs over the Upper Kingdom and the Lower Kingdom of Egypt. The snake that slithers along the base represents the cobra crown often worn by pharaohs.

The new Egyptian Gods Horus Rounds are available to you for purchase individually in plastic flips. Multiples of 10 come with plastic tubes, and this applies to both the High Relief BU and High Relief Antique versions of the rounds. Both rounds have a high-relief strike that delivers greater 3D relief on the design element and enhanced visual depth for the background field. The antique round has a distinctive polish that creates a sense that these rounds come from ancient Egypt itself.

Horus is one of the many important, primary deities from Egyptian mythology and religion. The son of Osiris and Isis, Horus is considered the God of Kingship, hence the depictions of his figure with the pschent crown. Additionally, he is in constant opposition with Set, the brother of Osiris who killed his father and tried to assume the kingship. Horus and Set are often in conflict, which is why Set is included in the beautiful, unique obverse design for the Horus release.

Get the New Horus Round Online at Provident Metals

Remember, our Egyptian Gods Rounds are only available for a limited time following release. As soon as the new design in the series is ready for development, production of these rounds will cease. So, there’s no time like the present to add Horus to your collection! Provident Metals’ customer service is available at 800-313-3315, online using our live chat, and via our email address. You can follow us on Facebook and read our weekly blog posts for updated information on new and upcoming products.