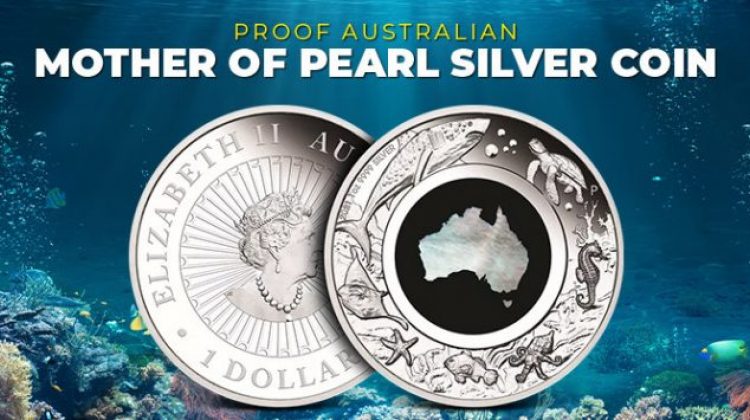 The annual gold, silver, and platinum bullion coins from the Perth Mint are already a well-known commodity among investors and collectors. While Perth Mint has an impressive and expansive catalog of bullion coin releases, its collection of Australian numismatic coins should not be missed. Among the new issues the mint has released for collectors as of late, the 2021 Great Southern Land release celebrates the beauty of Australia with a Mother of Pearl layer.

With the release of the 2021 Proof Australian Great Southern Land Mother of Pearl 1 oz Silver Coin, the Perth Mint achieves visual brilliance in a number of ways. The coins in this release are limited to 5,000 in total and have 1 Troy oz of .9999 pure silver per coin. The coins are packaged individually inside of acrylic displays with a clear lid that allows you to view the reverse field of the coin while it is on display within the case. The display and coin ship together in a blue, illustrated shipper that includes a depiction of the Australian continent with various native creatures filling the space. Each coin comes with a numbered Certificate of Authenticity from Perth Mint.

The obverse side of 2021 Proof Australian Great Southern Land Mother of Pearl Silver Coins features the latest effigy of Queen Elizabeth II to grace Australian coins. The longest-reigning monarch in British history, Her Majesty is shown here at the age of 89 in a right-profile effigy that includes the George IV State Diadem Crown. Designed by Jody Clark for the Royal Mint of England in 2015, this portrait is the sixth of the Queen to grace Australian coins and the first since 1966 to include her shoulders and full neckline in the portrait. The inscriptions on this side read ELIZABETH II, AUSTRALIA, and 1 DOLLAR.

On the reverse field of the 2021 Proof Australian Great Southern Land Mother of Pearl 1 oz Silver Coins is an image of the Australian continent. In this particular design, the mainland Australian continent is featured along with the island of Tasmania. Both of these elements are set against a black background field with a beautiful layer of Mother of Pearl covering the landmasses. This helps create a stunning visual contrast against the background field of the coin. Around the edge of the design field, you will notice countless forms of wildlife found off the coasts of Australia. These include a starfish, stingray, Great White Shark, and seahorse. Along the upper-left edge of the design field, you will notice inscriptions of 2021 1 OZ 9999 SILVER.

The standout of the Great Southern Land design is the application of Mother of Pearl on the Australian mainland and Tasmania. Mother of Pearl, or Nacre, is a composite organic-inorganic material that is produced within the inner shell layer of several mollusks. It also happens to be the material that results in fully-formed pearls. Aside from being strong and resilient, Mother of Pearl also happens to be iridescent. This means that it provides changing colors as you adjust the angle you view it from. As such, you can twist and turn your coin and watch the colors of the Australian mainland and Tasmania change.

Get Your Great Southern Land Coin While Supplies Last

Please feel free to reach out to Provident Metals if you have any questions about this new release. You can call us on the phone at 800-313-3315, chat with us live online, or simply send us an email with your inquiries. Remember to follow us on Facebook and read our weekly blog posts for more information on new releases.