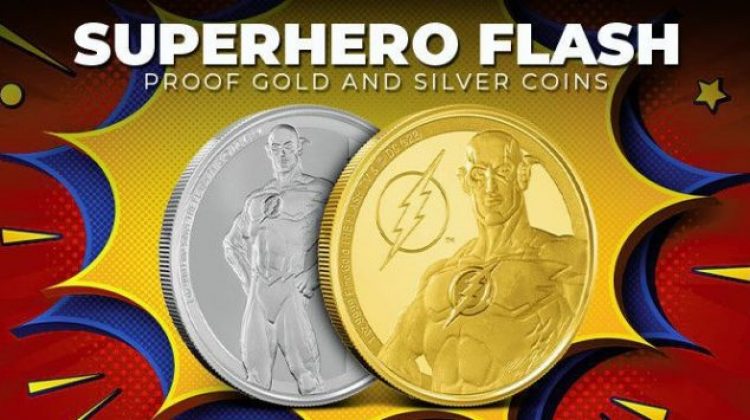 One of the oldest characters in the DC Comics universe is The Flash. Introduced in 1939, Flash is famous for his super-speed ability and wears a red superhero suit with a bright yellow flash of lightning on the chest. A member of the Justice League, Flash has appeared alongside other DC Comics stalwarts like Wonder Woman, Superman, and Batman, but has also enjoyed his own comics franchise. In a new series of Niue coins, Flash is featured in a silver and gold bullion release that is now available at Provident Metals.

There are two obverse designs available in the Proof Niue Classic Superhero Flash Series of gold and silver coins. Both designs focus on the figure of Flash standing in the foreground. In the gold coins in the series, Flash’s figure is zoomed in on his upper torso region with Flash looking right at you and his lightning bolt logo visible on his chest. The Flash logo is also featured in the background field.

For the silver coins in the series, the full figure of Flash is depicted in a similar stance. The background field of the silver coins offers more detail than the gold coins with the Flash logo in the lower-right field and a depiction of Flash in motion in the upper-right background field. Both coins have inscriptions along the edge of the design field that indicate the weight, metal content, and purity of the respective coins.

On the obverse of the four coins in the Classic Superhero Flash release, you will find the right-profile portrait of Queen Elizabeth II. Her Majesty is shown here in the 1998 design from Ian Rank-Broadley. This image features the Queen wearing the Girls of Great Britain and Ireland Tiara with common inscriptions of ELIZABETH II, NIUE, and 2022. However, each of the four coins will have its own face value noted.

Flash made his first appearance in the DC Comics universe in Flash Comics #1, a book issued with a cover date of January 1940 that was released in November 1939. Also known as the Scarlet Speedster, Flash has the power of super speed that applies not only to his ability to run and move with super speed but also the ability to think extremely fast and showcase lightning-fast reflexes.

Speed Your Way to More Silver and Gold with The Flash

For fans’ collection DC Comics items, the latest Flash release in the Classic Superhero Series is a must-have item. Provident Metals’ customer service is available at 800-313-3315. We are also available online using our live chat and email address features. You can follow us on Facebook and read our weekly blog posts for more information on new products.