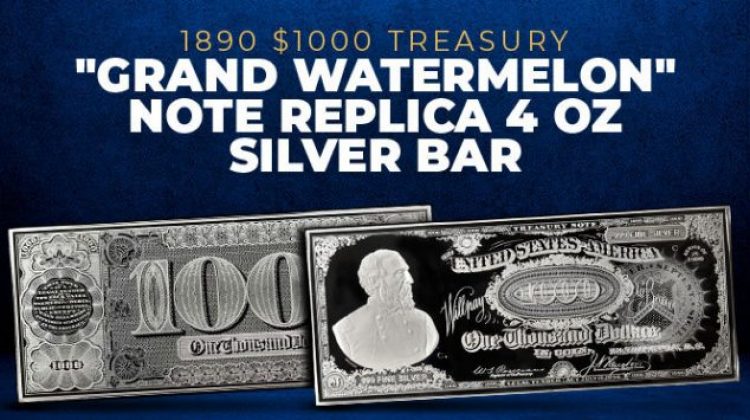 When it comes to collecting historic paper notes from the United States Treasury, there are countless series out there that offered beautiful designs and true works of art. These notes came from various series of paper money, including the United States Note, the Silver Certificate, Federal Reserve Bank Notes, and the short-lived Treasury Note Series. In fact, the latter released a design that many paper money collectors deem to be one of, if not the best designs in American history. With an exceptionally limited number of specimens still available, there is a modern option for those hoping to own the 1890 $1000 Treasury Grand Watermelon Note. This historic design has been given new life on a silver bullion bar that is now available through Provident Metals.

For the obverse design of the 4 oz Silver 1890 $1000 Treasury Grand Watermelon Bar, the mint precisely duplicates the images and notations from the original Treasury Note. On the left side of the bar’s design field, there is a three-quarter right-profile portrait of Union Army General George Meade, commander of the Army of the Potomac during the US Civil War. The design field to the center and right replicates the inscriptions from the Treasury Note itself and includes “Treasury Note,” “United States of America,” “1000,” “One Thousand Dollars in Coin,” and “Washington D.C.” In place of the serial numbers found on the original notes, here you will find “999 Fine Silver” both below the portrait of General Meade and above the US Treasury seal on the right side.

In the reverse of 4 oz Silver 1890 $1000 Treasury Grand Watermelon Replica Plate Bars, you will find the namesake design that helped create the popular demand among collectors for this note. What is really a simple, yet ornate design field became a sensation because of the zeros in the numeric denomination noted at the center of the design. The original note, and these bars, feature a large “1000” at the center, with “One Thousand Dollars” beneath. There are several other notations of the face value of the original note on this face of the replica bar, but it is those zeros that gave the original Treasury Note a lasting legacy.

What’s In a Name?

It would appear that there is a lot in a name. The 1890 $1000 Treasury Note became known as the Grand Watermelon for two reasons. For starters, the $1000 denomination of the note was the largest, by far, in the short-lived Treasury Note Series. The next closest denomination was a $100 note. However, it is the style of the zeros on the reverse and the color ink chosen for the note that gave it the name Grand Watermelon.

Each of the three zeros in “1000” are large numbers with small open spaces at the center. Given the shape and the use of green ink on the reverse of the original note, the public quickly began to refer to the 1890 $1000 Treasury Note as the Grand Watermelon.

Background on the US Treasury Note Series

The Treasury Note Series, otherwise known as the Coin Note, was introduced in 1890 as a result of the Sherman Silver Purchase Act. A form of representative paper money, the Treasury Note was limited in its production as it was only produced and released from 1890 to 1893. The notes were released in 1890 with denominations of $1, $2, $5, $10, $20, $100, and the now-famous $1,000 denomination. In 1891, a $50 denomination was added to the collection. The Treasury designed a $500 note, but never produced it. While several denominations had beloved, ornate design elements, it was the $1,000 note that generated the most attention among Americans in the late-19th century, and to this day among collectors.

There are only seven known specimens of the $1000 Treasury Note that survive today from an original run of 16,000 notes. Only two of them are actually available for private collectors to purchase through auction when the chance comes around. You’ll need deep pockets to get your hands on one when they do come up for auction. In January 2014, Heritage Auctions sold an 1890 $1000 Treasury Note for an astonishing $3.29 million, a price that at the time was a world record auction price for paper currency.

Don’t miss your chance to own this beautiful replica silver bar with the images from the Grand Watermelon Note. Provident Metals’ customer service can assist you on the phone at 800-313-3315, chat with your live online, or respond in writing via our email address. Remember to follow us on social media and read our weekly blog posts.