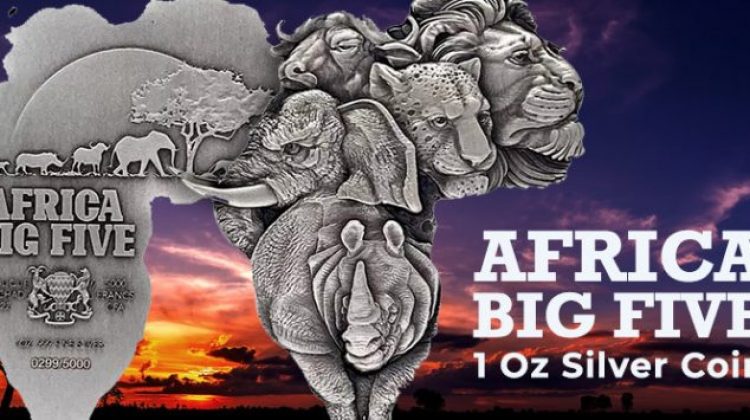 The African continent is a place of splendor, ecological diversity, and a variety of different wildlife. From jungles and savannas to mountain ranges and deserts, the African continent is a diverse place that is home to countless different wildlife species. While those species are too numerous to recount here, there are some that are famous around the world. In particular, the aptly named Big Five is a group of five animal species that have dominated the continent for thousands of years. These animals are now featured together in a singular, magnificent silver bullion coin design issued on behalf of the Republic of Chad

The coins in the 2022 Antique Republic of Chad Big Five Shaped 1 oz Silver release come with beautiful visuals and individual packaging from the mint. Each coin comes in a custom capsule matching its unique shape and is presented in a themed box. The exterior of the box comes with a photographic collage capturing the images of each of the Big Five animals from the African continent. The coins have an antique polish on both sides, with a high-relief strike on the reverse that showcases the 3D majesty of each animal. The release of these coins is limited to just 5,000 coins in total, with the individual serial number of the coin noted on its obverse field.

In the obverse design of the 2022 Antique Republic of Chad Big Five Shaped Silver Coin release, the mint features the national coat of arms for Chad. The Chadian coat of arms features at the bottom of the coin field, with inscriptions around it of AFRICA BIG FIVE, REPUBLIQUE DU TCHAD, 2022, 5000 FRANCS CFA, 1 OZ 999 FINE SILVER. At the bottom of the coin field, you will notice an individual serial number within the 5,000-coin release. These are noted as XXXX/5000. Along the top of the coin field, you will see the silhouettes of the Big Five as they march across the savanna in a line as the sun rises on the horizon.

For the reverse field of 2022 Antique Republic of Chad Big Five Shaped 1 oz Silver Coins, the mint offers up the mage the so-called Big Five from the African continent. Each of the five animals is featured here in a high-relief strike with the collage of creatures forming the shape of the African continent. The rhino forms the majority of southern Africa, while the African elephant stretches through the jungles of central Africa to the point known as the Horn of Africa, with its tusks forming that shape. The leopard and African lion form the shape of western Africa, while the Cape Buffalo is set along the Mediterranean coast near Africa’s connection to the Middle East.

The Big Five creatures in this design include, as mentioned above, the African elephant, African lion, leopard, Cape Buffalo, and rhinoceros. These creatures represent some of the largest animals in the world, the deadliest predators, and the biggest targets of big game hunters.

Collect the Big Five of Africa at Provident Metals

If you have any questions about this exciting coin release, please feel free to ask. Provident Metals’ customer service is available at 800-313-3315. We are also available to you online through our live chat and email address features. Remember to follow us on Facebook and read our weekly blogs for a better look at new coin releases.