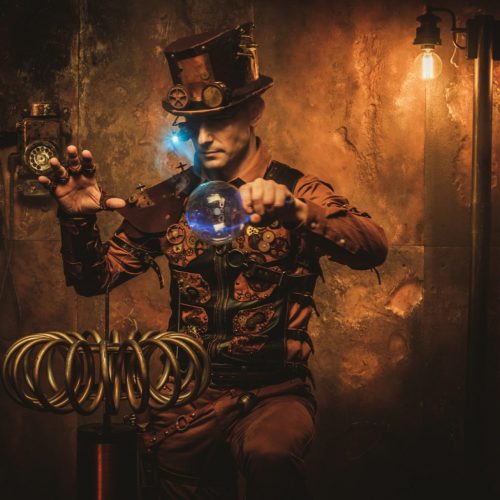 The third release in the Osborne Mint’s Angels and Demons Steampunk Collection of one ounce silver rounds is just around the corner, so we wanted to share information about the series as well as the steampunk movement. Once complete, this series will feature six angels and six demons designed by Ana and Mercedes Hidalgo of Studio Kawaii, two sisters who are well-known for publishing manga-style comics and graphic novels.

Each sequential release will reveal one angel and one demon every two months, with both designs offered in proof and antiqued finishes. The shared series reverse displays the “Angels and Demons” collection logo, along with the weight, purity, and mintmark. The obverse showcases the round’s featured angel or demon. Characters in this collection include:

This series is a celebration of the steampunk movement, which creates an alternative history by dropping steam-powered 20th century technology into the 1800s, often set in Victorian England or America’s Wild West. The term “steampunk” was coined in 1987 by science fiction author K.W. Jeter, who was trying to accurately describe his own work, along with other titles such as The Difference Engine, Homunculus, The Anubis Gates, and Morlock Night.

Though it began as a sub-genre of science fiction, steampunk has since evolved to encompass a fashion and costuming style, music, movies and television, and even a lifestyle for some fans. It’s common to see steampunk outfits styled after period Victorian clothing, with the addition of “retro-tech” accessories like goggles and clockwork gears. Steampunk characters and stories are often set in dystopian societies, in which the heroes tend to go against social convention. 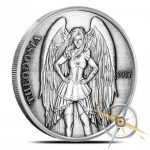 Steampunk has become such a popular genre that there are now entire conventions and festivals dedicated to the movement. You might recognize the aesthetic from popular movies like Wild Wild West, Treasure Planet, Van Helsing, and A Series of Unfortunate Events. Now, fans of the steampunk genre can also enjoy these design elements on silver bullion rounds. Start your collection with the Theodosia 1 oz silver vintage round and be sure to collect the rest of this series before limited quantities run out.