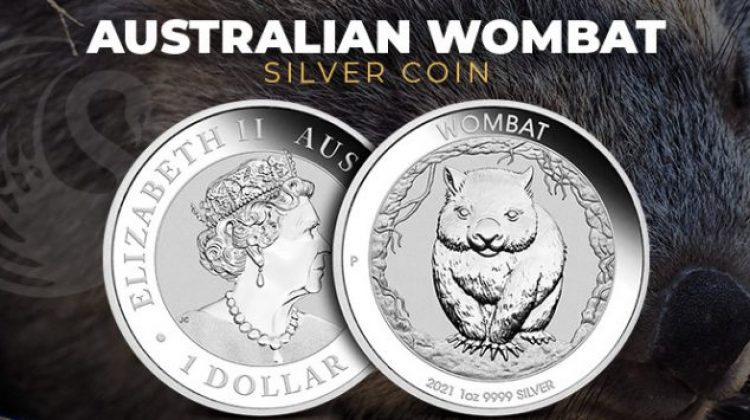 The Perth Mint is world-famous for making the many diverse species endemic to the Australian continent household names around the world. From the Kangaroo and Kookaburra in the 1990s to the Koala and Wedge Tail Eagle in the 2000s and 2010s, the Perth Mint has a long history in showcasing the endemic animals from the Australian continent. Now, the wombat joins this long list of creatures with its own 1 oz silver release. This week’s Provident Metals blog post takes a look at this newest Australian numismatic coin from the Perth Mint.

In the reverse design of the 2021 Australian Wombat 1 oz Silver Coin is a depiction of the wombat burrowing its way through a tunnel it is working on. The wombat has evolved over millions of years to feature powerful front claws and sharp teeth that it uses to dig and burrow underground, creating extensive tunnel complexes in the process. In this design, the Perth Mint sets the wombat on all fours looking forward down its tunnel complex with the mud, dirt, and roots of its tunnel easily visible in the design. Inscriptions on this face of the coin include “Wombat,” “2021 1 oz 9999 Silver,” and the “P” mintmark from the Perth Mint.

For the obverse field of 2021 Australian Wombat Silver Coins, the Perth Mint features Jody Clark’s effigy of Queen Elizabeth II. The Queen is shown here in right-profile relief with her shoulders and neckline captured in an Australian coin portrait for the first time since 1966. The effigy shows Her Majesty at the age of 89 and was initially developed by Clark in July 2015 for the Royal Mint of England. The inscriptions on this side of the coin read “Elizabeth II,” “Australia,” “1 Dollar,” and the “JC” initials of the designer.

The release of the 2021 Australian Wombat 1 oz Silver Coins comes with 1 Troy oz of .9999 pure silver content per coin. Each one has a face value of $1 in Australian dollars. The coins are available to purchase individually inside of protective plastic capsules. Bulk purchases come with the option of rolls of 20 coins or boxes of 100 coins. The box holds a total of five separate 20-coin rolls.

What is a Wombat?

The wombat is a burrowing, nocturnal marsupial that is one of three members of the Vombatidae. Believed to have diverged from other species of marsupials between 40 million and 25 million years ago, wombats are thought to have once roamed vast stretches of the Australian continent and offshore islands. Today, wombats are found primarily in forested, mountainous, and shrub land regions of Australia in the eastern and southern stretches of the continent. Wombats can also be found on Tasmania and there is an isolated population in Epping Forest National Park in Queensland.

Humans and wombats have long had a strained relationship since the arrival of Europeans. Though not numerous, there are a handful of cave drawings that have been found on Australia that showcase interactions between Aboriginals and wombats as far back as 4,000 years ago. Prior to the arrival of Europeans, wombats were considered a satisfying meal in the bush. Even after Europeans arrived, wombat stew was a popular dish that was widely regarded as one of the few truly Australian dishes. Today, farmers still view wombats as a nuisance to the destructive tunneling of the creatures across agricultural lands.

Adding the Wombat to Your Investments with Provident Metals

If you want to add the Australian Wombat to your collection of Australian silver, Provident Metals is here to help. You can call us with any questions at 800-313-3315, chat with us live online, or simply send us an email with your inquiries. We encourage you to follow us on Facebook and read our weekly blog posts for more information on our new and upcoming releases.