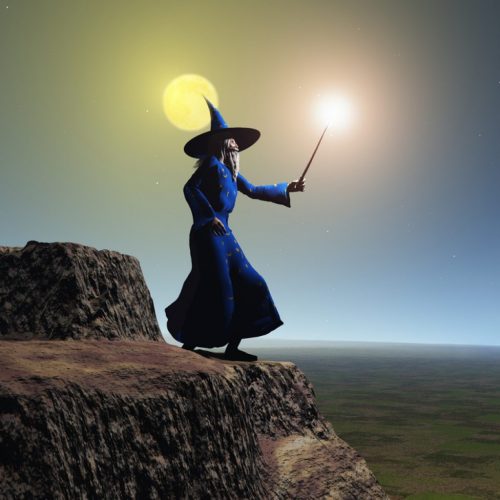 Everyone knows the name Merlin. The fictional wizard of Arthurian legends has been a popular character for centuries, with no shortage of variations of his tale across pop culture and the entertainment industry. But even though the famed magician is known for mentoring King Arthur, his original incarnation actually had nothing to do with the king of Camelot.

The character of Merlin first appeared in Geoffrey of Monmouth’s 1136 AD work titled Historia Regum Britanniae, or The History of Kings of Britain. The chronicle of battles was meant to pass as a translation of a long-lost ancient text, yet it included chunks of fiction. Geoffrey combined the stories of historical and legendary figures—including a prophet and madman named Myrddin and a Romano-British war leader named Ambrosius Aurelianus—to create Merlin. Geoffrey’s story detailed Merlin as the son of a human woman and a demon, giving him shape shifting and other magical powers.

In Geoffrey’s work, Merlin moves Stonehenge from Ireland to England as a burial location in one story. The wizard’s second story involves giving a potion to a man named Uther Pendragon that transforms him into the husband of the woman he wishes to sleep with, which leads to the conception of Arthur. These stories became popular, particularly in Wales. As adaptations were created over many decades, the character of Merlin evolved into a powerful wizard who tutored and mentored Arthur, guiding him to Camelot’s throne.

If you could have one magical ability, what would it be? Let us know in the comments section below to enter our August giveaway. But remember to keep it classy; inappropriate comments will be disqualified. Submit your comment (one comment only please) by August 21, 2017. One winner will be randomly selected on August 22, 2017 to receive a Merlin 1 oz proof AND antiqued silver round from our Celtic Lore series.