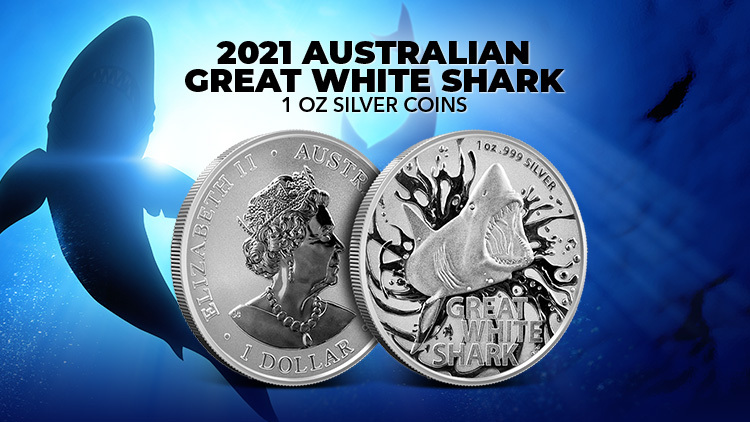 The reverse face of the 2021 Australian Great White Shark 1 oz Silver Coin is a depiction of one of the ocean’s deadliest predators. An apex predator, there are no natural enemies of the Great White in the ocean except for the occasion aggressive encounter with an orca whale. The cult classic film Jaws brought the Great White into the global consciousness and made more than a few people afraid to go in the water. Here, the powerful and aggressive beast is shown propelling itself out of the water upward like a missile as it exposes its rows upon rows of deadly teeth while on the attack. It is said the average Great White has more than 300 teeth in its mouth that are arranged in several rows. Inscriptions on this face of the coin read “1 oz .999 Silver” and “Great White Shark.”

On the obverse side of the 2021 Australian Great White Shark Silver Coins is a bust of Queen Elizabeth II. This is the sixth-generation effigy of the Queen to appear on Australian coins and it originated at the Royal Mint of England. The design was created in July 2015 by Jody Clark and began to appear on Australian coins in 2019. The bust of the Queen shows her wearing the George IV State Diadem Crown. The inscriptions on this face of the coin include “Elizabeth II,” “Australia 2021,” and “1 Dollar.”

Details of the Australia’s Most Dangerous Release

The 2021 Australian Great White Shark is the second release in the Australia’s Most Dangerous Series and follows the Redback Spider. The coins have 1 Troy oz of .999 pure silver in Brilliant Uncirculated condition with a face value of $1 (AUD) backed by Australia. The coins are available in individual protective plastic capsules and the Royal Australian Mint has limited the mintage of this coin to just 25,000 coins.

History of the Royal Australian Mint

Now is your chance to capture the second design in the Australia’s Most Dangerous Series. The coins are currently available at Provident Metals. Please contact us with questions at 800-313-3315, chat with us live online, or email us directly. You can also follow us on Facebook for daily posts and spot price contests, and read our weekly blog posts for more information on upcoming and new releases.