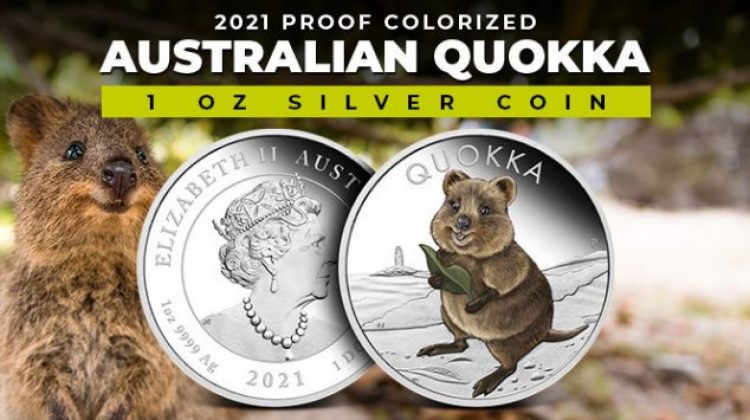 Numismatists buying collectible silver from the Perth Mint have seemingly endless options to choose from. For those who seek out the many flora-and-fauna-related designs from the Perth Mint, Australian numismatic coins often feature native creatures from the Australian continent that you won’t find anywhere else in the world. Joining the likes of the kookaburra, koala, kangaroo, and emu is the quokka, a new release in 2021 that is available as a colorized proof. Take a moment to learn all about this latest Australian numismatic silver release in the Provident Metals blog.

On the reverse side of 2021 Proof Colorized Australian Quokka 1 oz Silver Coins is an all-new native species design. Featuring for the first time on Australian silver coins, the cuddly quokka is shown here in the immediate foreground of the coin as it stands on its hind legs and uses its front paws to clutch a small leaf. The quokka’s habitat range today is largely confined to islands off the coast of Perth, Western Australia. As such, the quokka is shown here on the beach along Australia’s west coast. As a colorized proof, these coins have natural tones of brown to capture the fur of the quokka and green for the lush leave the herbivore is dining on. Perth Mint proofs have frosted designs above mirrored fields for contrast. As the beach winds off into the distance, a lone lighthouse appears on a point of land. Inscriptions include “Quokka” and the “P” mintmark of the Perth Mint.

The obverse field of the 2021 Proof Colorized Australian Quokka Silver Coin comes with a depiction of Her Majesty, Queen Elizabeth II. As head of the Commonwealth of Nations, Queen Elizabeth II holds various titles among the nations of the Commonwealth. In particular, she holds the rare title of Queen of Australia. This 2015 design from Jody Clark is the sixth-generation effigy of Her Majesty to grace Australian coins. This effigy debuted in Perth Mint coins in 2018, with wider use starting in 2019. In the design, the Queen is shown wearing the George IV State Diadem Crown on her head. The Queen also wears earrings and the Victoria coronation necklace. Inscriptions on this field of the coin read “Elizabeth II,” “Australia,” “1 Dollar,” “2021,” and “1 oz 9999 Ag.”

Coins in the 2021 Proof Colorized Australian Quokka Silver Coin release come individually packaged. With a limited mintage of just 5,000 silver coins in total, the Australian Quokka Coins are packaged in black presentation cases from the Perth Mint. Each coin has a black case with a clear, Perspex lid on it that bears the swan logo of the mint in the lower-left field. The coin and case are packaged together inside of an artistic shipper. The full-color shipper has the name of the species and the release information for the coin, as well as a photographic display of the reverse imagery from the coin, without the quokka present. The aquamarine waters of Western Australia are captured in full glory with white-sand beaches and green foliage leading to the lighthouse in the distance. The coins come with 1 Troy oz of .9999 pure silver and a Certificate of Authenticity from the mint.

What is a Quokka?

A nocturnal marsupial that is closely related to the wallaby and the kangaroo, the quokka derives its name from a Nyungar word. The Nyungar were Aboriginal Australians and it is believed their word “gwaga” was the one given to the quokka. Prior to the arrival of Europeans on the Australian continent, the quokka could be found across 15,900 square miles of land in the southwestern regions of Western Australia. The population at the time included isolated colonies on Bald Island and Rottnest Island off the coast. By the 1990s, the mainland range of the quokka had shrunk to just 6,900 square miles in the state of Western Australia along the Indian Ocean coast.

Now’s your chance to add the latest marsupial-themed design from the Perth Mint to your collection of Australian numismatic coins. Provident Metals’ customer service is happy to assist you with any questions. Our team is available to help you with questions at 800-313-3315, online using our live chat, and via our email address. Don’t forget to keep up with us on social media and read our weekly blog posts for greater insight on new and upcoming releases.