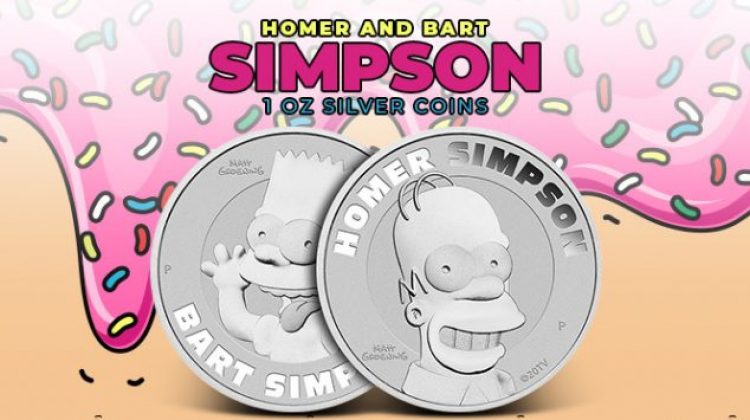 One of the most popular new lineups from Perth Mint in the last several years has been its Simpsons-themed silver bullion. These Tuvalu silver coins have been available since 2019, and though they originally celebrated the show’s record-breaking run, it continues with new designs in 2022 featuring members of the family in different images. The latest releases include a new series known as The Simpsons Mini Series.

Among the longest-running coins from Perth Mint in its range of Simpsons products is the 1 oz silver BU coin. The 2022 release schedule features a Bart Simpson design and a Homer Simpson design. Both of these coins feature 1 Troy oz of .9999 pure silver in BU condition. The coins boast a face value of $1 (TVD) and have a limited mintage of 25,000 coins per design. The silver BU specimens are all individually encapsulated, with multiples packaged in sealed rolls of 20 coins or boxes of 100 coins with five individual rolls.

The 2022 Tuvalu Bart Simpson 1 oz Silver Coin features a depiction of Bart mocking you on the reverse. He has his tongue out as he raises his hands to the sides of his face with his thumbs in his ears. On the reverse of 2022 Tuvalu Homer Simpson 1 oz Silver Coins, you will find the image of Homer Simpson smiling at you. Both coins have the 20th TV trademark and signature of Matt Groening, the series designer. Queen Elizabeth II features on the obverse of both coins. The right-profile effigy of the Queen shown here is the fourth-generation British design created in 1998 by Ian Rank-Broadley and shows the Queen with the Girls of Great Britain and Ireland Tiara.

In an all-new release from Perth Mint, Bart Simpson debuts as the first character in the new The Simpsons Mini Series. These coins are shaped miniatures reflecting the images of the characters from The Simpsons. Each one is not only a shaped coin, but it also has a colorized reverse field. The 2022 Tuvalu The Simpson Mini Series Bart Simpson 1 oz Silver Coin features a miniature vision of Bart. The depiction captures his spiked hair, with Queen Elizabeth II on the obverse and the image of Bart on the reverse. He even has his traditional yellow skin tone, red shirt, and blue shorts.

Each one of these coins comes in a clear acrylic case with an upright display stand within the presentation box. The coins have a Certificate of Authenticity from the mint and a limited mintage of only 2,500 silver coins.

History of The Simpsons

In April 1987, The Simpsons debuted on The Tracey Ullman Show as a 30-second short following the antics of a family from Springfield, USA, a fictional town. In December 1989, the show debuted on FOX as a 30-minuted animated series and has not stopped in the decades since. In the past several decades, The Simpsons have earned 35 Primetime Emmy Awards, 34 Annie Awards, and 2 Peabody Awards. Through 33 seasons, some 728 episodes of The Simpsons have aired.

Get the Latest Simpsons Coins from Perth Mint

Provident Metals is proud to continue carrying Simpsons-themed bullion coins, including these all-new 2022 issues. Please feel free to reach out to us with questions at 800-313-3315, online using our live chat, and via our email address. You can also follow our weekly blog posts and Facebook page for more information on new and upcoming products.