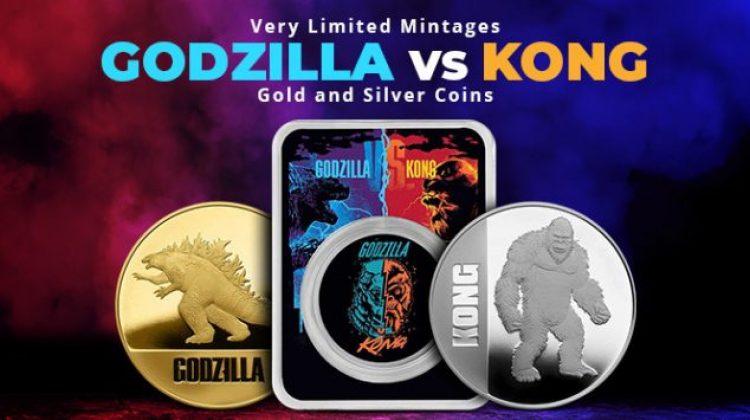 Legendary Entertainment’s MonsterVerse is a multimedia franchise featuring some of the most famous fictional creatures of all time in feature films. The fourth issue in the franchise and latest film launched in 2021 with Godzilla vs. Kong. This series brought together two monsters that have been battling others, and each other, for nearly a century now. Today, these two legendary beasts collide in a 10-coin collection of Godzilla vs. Kong coins issued on behalf of Niue. With 10 coins in all, there’s something for every collector in this exciting series of coins.

With 10 coins available in this series, it’s important to break down the designs based on the creatures in the series. Within the 10-coin release, there are five coins devoted to King Kong, the mythical, massive gorilla from Skull Island. Among these five coins, there are three different ways to conquer King Kong:

Just as there are five King Kong designs, the series offers you the chance to own one of five Godzilla designs. In addition to the aforementioned Colorized 1 oz Face Off Silver Coin that features Godzilla’s head in front-facing relief on the left side of the figure, you will find the following design options honoring the mythical figure from Toho film productions in Japan:

Whether you purchase one of the BU coins in this series, the colorized coin, or the proof silver coin, you will receive a specimen with the same obverse design. That design shows the silhouettes of Godzilla and King Kong in the background field battling for supremacy of the MonsterVerse. The coins include inscriptions of the weight, metal content, purity, date, and face value. Beneath the silhouettes of the beasts, you will find the Public Seal of Niue, a design used on select Niue releases as an alternative to Queen Elizabeth II’s effigy.