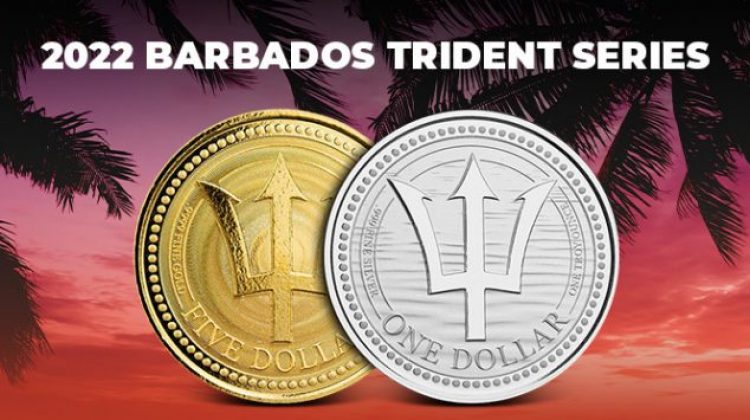 There are two common approaches to the production of the annual bullion coin series. Producers like the Chinese Mint and the Perth Mint of Australia use new designs for the primary visual on each new annual release. Conversely, the Royal Canadian Mint, United States Mint, Royal Mint, and the Austrian Mint, to name a few, offer static designs that investors and collectors keep coming back for each year. The Scottsdale Mint has combined these two approaches, in a sense, with its Barbados Trident Series. Part of the collection of foreign silver coins available at Provident Metals, the Barbados Trident is a popular collection that launched in 2017.

For the obverse design of 2022 Barbados Trident 1 oz Silver Coins, the Scottsdale Mint uses the same design each year. Here, the national coat of arms for the island nation is depicted. Issued by Royal Warrant of Queen Elizabeth II in February 1966, the seal includes a spade-shaped shield at the center that has a bearded fig tree in the middle flanked by two Red Pride of Barbados flowers in the upper-right and upper-left corners. The shield itself is flanked by a heraldic dolphin and a pelican, with a knight’s helmet at the top that shows a human hand and forearm emerging. This hand clutches sugar cane stalks. Other features of the obverse design include a split date mark of “20” and “22,” with trident heads under each date. The banner beneath the shield reads PRIDE AND INDUSTRY, the national motto, with BARBADOS inscribed along the bottom rim of the field. The entire design is surrounded by a beaded border.

In the reverse field of the 2022 Barbados Trident Silver Coin, the mint features a large trident head at the center. This design is inspired by the Barbadian national flag, a flag with three vertical panels that pair two blue panels on the outer edges with a central yellow panel that has a large trident head. The trident is an ancient symbol of power and control over the seas and was often associated with the Greek and Roman gods said to rule the seas. This side of the coin has inscriptions of .999 FINE SILVER, ONE TROY OUNCE, and ONE DOLLAR. This side also has a beaded border element.

With the release of the 2022 Trident 1 oz Silver Coin, the Scottsdale Mint once again offers a 1 Troy oz coin in Brilliant Uncirculated condition that has .999 pure silver content. The coins are available individually inside plastic flips, with multiples of 20 in acrylic tubes and multiples of 500 in a mint-sealed box. The box comes with 25 individual 20-coin tubes.

Although the Barbados Trident Series offers the same primary images on the obverse and reverse each year, there is a variation in the design if you keep a close eye on the reverse background field. Each year has offered a different reverse background visual, with the vast majority of those in the program’s brief history taking on a different water effect. This year, the coins have gentle waves rippling along an otherwise calm field.

Build Your Caribbean Silver Collection with the Barbados Trident

With the release of the 2022 Barbados Trident, the Scottsdale Mint takes the series beyond its fifth anniversary to the sixth year of availability. Please feel free to reach out to Provident Metals with questions about this collection. You can call us at 800-313-3315, chat with us live online, or email us directly.