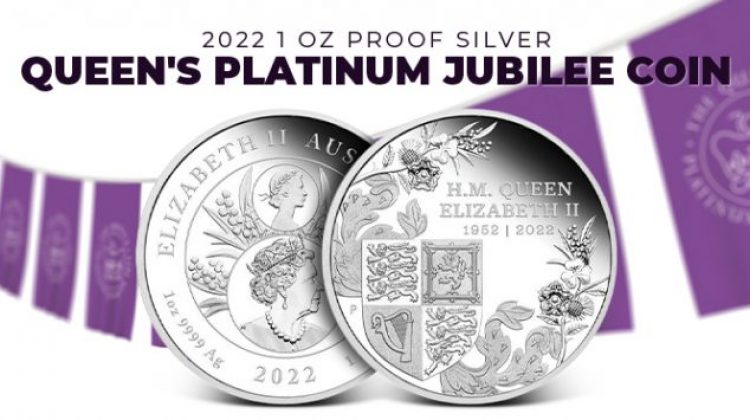 There are few mints in the world today with the reputation of Perth Mint. Founded in 1899 as a Royal Mint branch mint in Australia, today it is owned and operated by the government of Western Australia. Over the course of the last several decades, Perth has established itself as a leader in the precious metals marketplace, producing not only gold and silver bullion bars, but also gold, silver, and platinum bullion coins. From investment-grade pieces to commemorative coins, Perth Mint has struck it all. In 2022, it offers a new Australian silver numismatic piece in honor of Queen Elizabeth II’s Platinum Jubilee.

In the obverse design of the 2022 Australian Queen’s Platinum Jubilee 1 oz Silver Coin, Perth Mint offers not just the latest effigy of the Queen, but also the very first portrait of the monarch to ever grace coins of the Commonwealth. At the center of the coin, Jody Clark’s definitive sixth-generation effigy of Queen Elizabeth II in right-profile relief is featured with the George IV State Diadem on her head. Above this, you will find the first-generation portrait of Her Majesty created back in 1952. This design shows a young Queen Elizabeth II in right-profile relief wearing a laurel wreath crown. Inscriptions on this side include ELIZABETH II, AUSTRALIA, 1 OZ 9999 AG, 2022, and 1 DOLLAR.

For the reverse design field of 2022 Queen’s Platinum Jubilee Silver Coins, the Perth Mint features a beautiful field of flowers behind the Royal Arms of the United Kingdom. This spade-shaped shield is quartered and features the individual coat of arms for the three independent nations forming the United Kingdom. This includes the images of the Three Lions of England in the first and fourth quadrants, while the Lion of Scotland and Irish harp feature in the second and third quadrants, respectively. The inscriptions on this face of the coin read H.M. QUEEN ELIZABETH II and 1952 | 2022.

The commemorative 2022 Proof Queen’s Platinum Jubilee 1 oz Silver Coin is a proof specimen with 1 Troy oz of .9999 pure silver. Perth Mint has struck the coins with frosted design elements and mirrored background fields. The release is limited to 5,000 coins in total and comes with perfect packaging. The coins are individually housed in black displays with a clear lid. The coin and case come with a themed shipper from Perth Mint that includes a Certificate of Authenticity.

There is no shortage of accolades for Queen Elizabeth II in her reign as Queen of England. Succeeding her father in February 1952, Elizabeth II ascended the throne at the age of 25. In the decades since, she has gone on to set one record after another as the monarch of England and the Commonwealth. She is not only the longest-living and longest-reigning monarch in British history, but she is also the longest-serving female head of state, the oldest living current monarch, and oldest head of state. Among her records as Queen of England, she is the only monarch to celebrate a Sapphire Jubilee marking 65 years on the throne, and now the only one to celebrate a Platinum Jubilee marking 70 years on the throne.

There’s a limited opportunity to own the Platinum Jubilee coin honoring Queen Elizabeth II’s 70 years on the throne. If you have any questions, please don’t hesitate to ask. Provident Metals’ customer service is available to assist you at 800-313-3315, online using our live chat, and via our email address. Please don’t forget that you can follow us on Facebook and read our weekly blogs to keep up with new products.