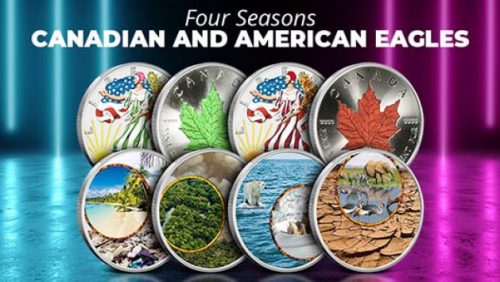 American Eagle Silver Coins and Canadian Maple Leaf Silver Coins are a popular format for colorized coin sets enhanced at authorized third-party dealers. The Four Seasons Set using these two popular silver bullion coins is one shining example of beautiful collector sets that take coin design in a different direction. Past releases have featured simple colorization showcasing the four seasons of the year, while recent releases have gone further with applications on the reverse and obverse, respectively, to deliver all-new scenes. If you’re interested in the 2020 Save the World Four Seasons Set, you now have a chance to learn more about it before purchasing. 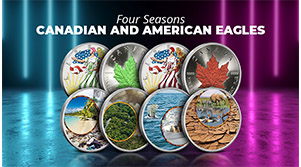 Each 2020 Save the World Four Seasons Coin Set is packaged in a beautiful wooden display box that has an individual slot for the four coins to rest in. The set comes with a Certificate of Authenticity from the dealer. The coins in this set are in Brilliant Uncirculated condition from the United States Mint and Royal Canadian Mint, respectively, and have been colorized after leaving the mint by the authorized dealer packaging the sets. Each set is limited in issue to just 2,000 silver coin sets.

Common Save the World Elements

The reverse of the 2020 American Silver Eagle and obverse of the 2020 Canadian Silver Maple Leaf have been covered in this release with a colorized, photographic design depicting four different climate regions around the world. A small picture window in the design captures that region as it should be, while the background window shows the effects a changing climate is having on those various regions. These include:

Each coin represents a different season as Liberty marches through the calendar year from Winter and Spring to Summer and Fall. The colors of her dress change with the season, invoking warm, dark tones in the winter months and bright, rich colors for the warmer seasons. Likewise, the branches she carries reflect the changing seasons with bright blooms in spring and darker browns for winter. Finally, the mountain and sun also showcase the changing seasons as the pale yellow of a distant winter sun crests the snow-covered mountain, while the full, rich yellow of the summer sun shines down on a lush, green mountain in the summer design.

The reverse design of 2020 Canadian Maple Leaf Save the World Edition Four Seasons Sets retains its beautiful sugar maple leaf design created in 1979 by Walter Ott for the Royal Canadian Mint to use on the Canadian Maple Leaf Gold Coin. Like the Walking Liberty designs on that set, these coins have different colorizations on the sugar maple leaves to capture the changing seasons of the year. The spring coin offers a bright, new sugar maple leaf while the summer coin offers up a rich, green leaf nurtured by sunshine and rain. The fall leaf design showcases the beauty of changing colors during autumn, while the winter leaf shows the brown decay that proceeds the rebirth of spring.

Collect Save the World Sets with Provident Metals

The new 2020 Save the World Edition of the Four Seasons Coin Set is now available to you at Provident Metals. If you have any questions, we’re happy to assist. Just call us at 800-313-3315, chat with us live on the web, or email us directly. We’re back with new blog posts each week to provide insight on new and upcoming products, and you can always stay in contact with us via Facebook.