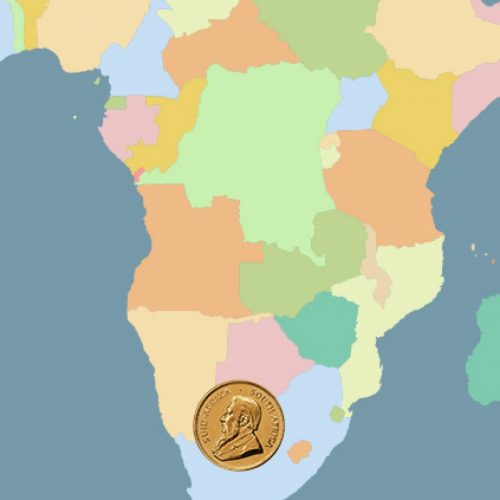 Despite being the origin of much of the world’s gold, platinum and diamonds, Africa is fairly sparse in precious metals bullion.

The South African Gold Krugerrand is perhaps the most recognizable gold bullion in the world: 46 million troy ounces have been sold since 1967. It was a pioneer in the gold bullion market, and made up 90% of the global gold coin market by 1980.

It is made of .9167 ounces of gold, with a copper alloy for strength.

The coin got its name from the portrait on the obverse, Paul Kruger, a four-term president of the now-defunct South African Republic. The reverse shows a springbok antelope, one of the national symbols of South Africa.

Despite being minted by the privately owned Rand Refinery, the Krugerrand is legal tender in South Africa, though it does not have a marked denomination. During the apartheid struggles in the 1970s and 1980s, some countries banned the import of the Krugerrand, but the coin remains intensely popular today.

Do you include Krugerrands in your collection?