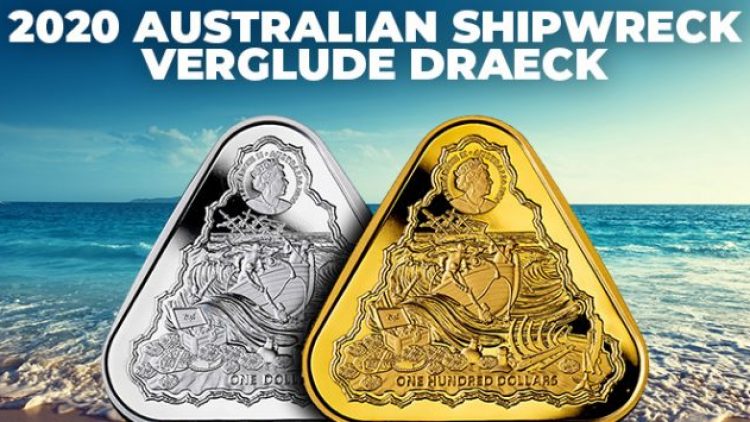 The 16th century set off an age of exploration that saw human civilizations construct ever bigger, ever grander sailing vessels to explore the world, expand trade routes, and increase humanity’s understanding of the world around it. An unfortunate side effect of this exploration was an increase in the goods, lives, and ships lost to shipwrecks. While these sailing vessels were impressive, a lack of technology to guide the ships, little understanding of coastal waterways in new lands, and the inherent fragility of wooden ships led to countless lives lost. The Shipwreck Series from the Royal Australian Mint features four unique designs highlighting a small handful of the 8,000 known shipwrecks that lie off the coastline of Australia. Following the successful launch of Batavia, RAM is back with the Vergulde Draeck as the second release and Provident Metals customers will be able to collect it once it releases on February 4th.

The Vergulde Draeck Design – A Bad Dream Come to Life

On the obverse field of the 2020 Australian Shipwreck Vergulde Draeck 1 oz Silver Coins, the nighttime horror of the Vergulde Draeck’s sinking comes to life centuries later. The design features the Vergulde Draeck in the distant background disabled and sinking after striking a coral reef systems on the night of April 28, 1656. Amid the shock of the collision and the swift sinking of the ship, 75 survivors made it to shore from a crew of 193. In the foreground, you can see some of those individuals struggling to get ashore on choppy waters as debris and goods from the cargo hold of the Vergulde Draeck wash ashore around them.

At the top of the obverse, the design field is the sixth-generation bust of Queen Elizabeth II. Her Majesty is shown here in right-profile relief in a design from Jody Clark that shows her with the George IV State Diadem Crown on her head.

Packaging and Mintage for the Vergulde Draeck

Background on the Vergulde Draeck

The sinking of the Vergulde Draeck occurred at night as the vessel was sailing between Seabird and Ledge Point on the coast of Western Australia. In the dark of night, the ship struck a coral reef and quickly sank. 118 crewmembers are believed to have perished during the sinking itself, going down with the ship and its cargo of eight boxes of silver coins and other trade goods. The combined value of the coins and trade goods lost was just over 180,000 guilders.

75 survivors managed to struggle to shore with a barge from the ship in tow, but the nightmare was just beginning for these folks. After nine days marooned in Western Australia, eight crewmembers set off in the barge in hopes of reaching Batavia and summoning help. After 41 days, those eight lucky survivors made it. The Dutch East India Company sent out four rescue missions, but never found signs of the remaining survivors back in Western Australia.

History of Shipwrecks in Australia

The Australian continent has some 8,000 known shipwrecks lurking beneath its coastal waters. The first known shipwreck occurred in 1622 when the English ship Trial sunk off Western Australia’s northwest coast. As the Dutch rose to command the seas in this region in the 17th and 18th centuries, the number of Dutch shipwrecks increased, with the Dutch ships Batavia, Vergulde Draeck, Zuytdorp, and Zeewijk all meeting with doom off the coast of Australia.

The Vergulde Draeck is the second in the four-coin Shipwreck Series from the Royal Australian Mint. Please feel free to contact Provident Metals customer service if you have any questions. You can reach us on the phone at 800-313-3315, chat with us live online, or simply send us an email with your inquiries.