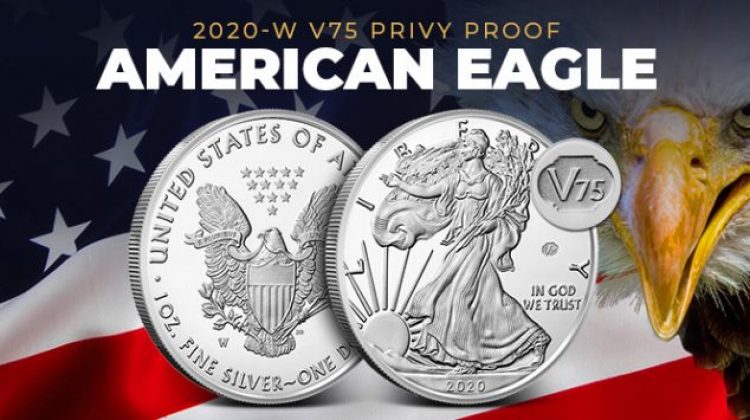 The United States Mint is well-known for its American Eagle bullion series and its annual array of collectible silver and gold coins. While 2020 saw the US Mint honor 75 years since the conclusion of World War II with distinctive design releases, it also saw an even rarer sight as the Proof American Eagle Silver Coin and Proof American Eagle Gold Coin were both issued with a privy mark. In the spring of 1945, the guns of Europe finally fell silent after six years of horrendous warfare. Months later in the late summer of 1945, the brutality of the island-hopping campaign in the Pacific Theater came to a close following America’s victory over Imperial Japan. Today, 2020 Privy Proof American Eagle bullion coins are available with a distinctive mark honoring the 75th anniversary of the end of World War II. With traditional proofs and certified options, there’s something for every collector in this beautiful range of coins.

In the Privy American Eagle range for the 75th-anniversary release, the United States Mint offered a 2020-W Proof American Eagle 1 oz Silver Coin and a 2020-W Proof American Eagle 1 oz Gold Coin. Both coins featured their trademark design elements, with Walking Liberty and the Heraldic Eagle on the silver coin, and Saint-Gaudens’ Lady Liberty and the family of bald eagles on the gold coin. Additionally, both coins featured the same V75 privy mark on the obverse field, but more on that in a minute.

The coins were issued by the US Mint with beautiful presentation packaging. Both options came with capsules around the coin and velvet-lined presentation boxes, as well as a themed shipper and a Certificate of Authenticity. The silver coins were housed in blue displays and blue shippers, while the gold coins came in maroon displays and shippers. The silver coin had a commemorative mintage of 75,000 coins only, in honor of the 75th anniversary, while the gold coin had a mintage of just 1,945 coins, reflecting 1945 as the final year of the conflict.

The V75 Privy – A Distinctive Mark

In September 2001, the United States finally began construction on a National World War II Memorial. The site chosen for the memorial was on the Rainbow Pool at one end of the national Reflecting Pool that sits at the heart of the 2.1-mile long National Mall stretching from the Washington Monument to the Lincoln Memorial. The Rainbow Pool was built in the 1920s shortly after the Lincoln Memorial and was incorporated into the design of the National World War II Memorial. The Rainbow Pool offers its shape to the V75 Privy Mark on these beautiful Proof American Eagle bullion coins from the US Mint. The pool was renamed the Rainbow Pool back in 1924 after it was noticed that its waters formed a perfect rainbow when the 124 nozzles spray water out into the pool.

In addition to the original issues from the US Mint, it is possible to own certified versions of the Proof American Eagle Silver Coin from this release. A small batch of the 75,000 coins issued in the 2020 V75 Privy Proof American Eagle Silver Coin release were certified as both NGC PF70 ER and NGC PF69 ER coins by the Numismatic Guaranty Corporation. The details behind these certifications are as follows:

With limited supplies and high demand for such a unique collectible piece, these beautiful V75 Privy Proof American Eagle bullion coins won’t be available for long. Provident Metals’ customer service would be happy to assist you with any questions on the phone at 800-313-3315. You can also reach out to us online through our live chat and email address features. As always, you will find weekly blog posts available to keep you in-the-know regarding upcoming releases and you can also follow us on Facebook for daily and weekly posts.