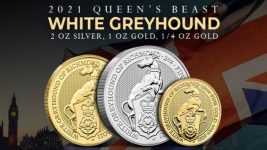 Since 2016, investors and collectors have swooned for the 10 designs released in the Queen’s Beast Series from the Royal Mint of England. The Queen’s Beast Series recreates the 10 stunning statues present at the 1953 official coronation ceremony for Queen Elizabeth II. Sculpted by James Woodford, these beasts represented the various heraldic animals featured in the Royal Arms of England through its nearly 1,000 year history. Now, the collection of Queen’s Beast coins comes to a conclusion with the release of the White Greyhound of Richmond. 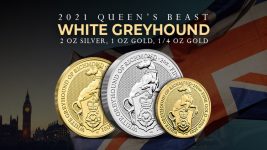 The reverse face of the new 2021 British Queen’s Beast White Greyhound 1 oz Gold Coins includes the final heraldic animal design for the series. Here, a sleek, powerful greyhound stands on its hind legs as its front paws hang over the front of the Tudor shield. The House of Tudor’s official seal was a shield with a crowned double rose at the center. On this face of the coin, you will find inscriptions of “White Greyhound of Richmond,” along with identifying details of “1 oz Fine Gold 999.9,” “2021,” and “JC,” the initials for designer Jody Clark. The other coins will feature weight, metal content, and purity inscriptions matching the specific releases.

On the obverse side of the 2021 British Queen’s Beast White Greyhound 1/4 oz Gold Coin is a bust of Queen Elizabeth II. In this design from Jody Clark, Her Majesty is found in right-profile relief at the age of 89. She is wearing the George IV State Diadem Crown with earrings in. The background field features a guilloche design element common on Royal Mint coins as of 2016 as a security feature that makes counterfeiting more difficult. Inscriptions on this face of the coin include “25 Pounds,” “Elizabeth II,” and “D.G. Reg F.D.” The other weights in the series include the matching face value

The Royal Mint of England will offer all of the same Brilliant Uncirculated and Proof options of the Queen’s Beast White Greyhound coins. The first issues will be the 1 oz gold, 1/4 oz, gold, and 2021 British Queen’s Beast White Greyhound 2 oz Silver Coin. These coins all ship individually inside of protective plastic flips, with mint packaging available for multiples. The multiple options include the following:

In addition to these primary BU versions of the coin, the Royal Mint will eventually release the 10 oz silver and 1 oz platinum bullion coins. Each of these options include only protective acrylic capsules with purchase. Additionally, you will also find Proof versions of the Queen’s Beast White Greyhound of Richmond coins. The silver coins come with 1 oz, 5 oz, 10 oz, and 1 Kilo proof silver coins. The gold coins in the proof range come in 1/4 oz gold, 1 oz gold, 5 oz gold, and 1 kilo gold options.

History of the White Greyhound of Richmond

John’s son Henry, the grandson of King Edward III, became the first King of England from the House of Lancaster as King Henry IV. John of Gaunt used the White Greyhound in his personal badge as the dog species was favored among the residents of northern England. The greyhound remained associated with the titles of Earl of Richmond and later Duke of Richmond.

The White Greyhound would commonly feature with the House of Tudor seal. This seal includes a shield split vertically in half with a double rose at the center bearing a white rose and red rose, symbolic of the merger of the House of Lancaster and House of York. Above the double rose is a crown with a surmounted rose.

Finalize Your Collection with the White Greyhound from Provident Metals

As of September 2020, the new 2021 Queen’s Beast White Greyhound of Richmond bullion coins are available for presale at Provident Metals. Now is your chance to complete the collection with the White Greyhound. Please feel free to call us at 800-313-3315 with questions, connect with us online through our live chat, and via our email address. We also encourage you to follow us on Facebook and read our weekly blog posts.