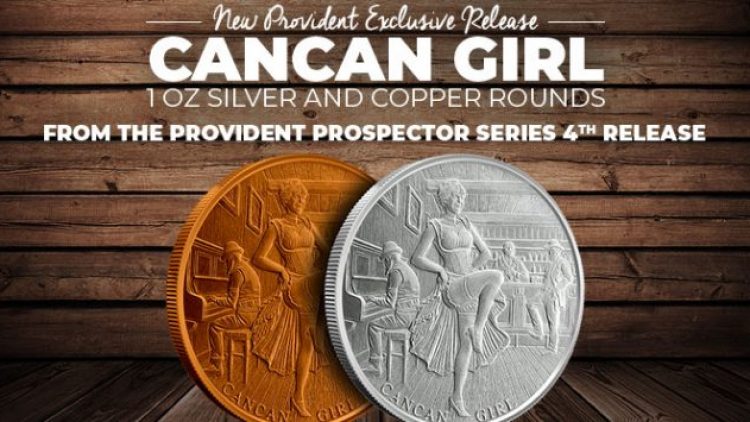 The exclusive Provident Metals series of silver and copper rounds known as the Prospector Series returns with the January 2020 release of the CanCan Girl. This is the fourth issued in this Wild West-themed collection. Each of the designs in the series is issued not with a limited mintage figure, but instead with a limited timeline for production. This means it is important to act quickly as you build your collection of Prospector Series rounds. With all of the past designs, except the copper Prospector Round, already sold it, there’s no time to waste when buying your CanCan Girl silver and copper rounds.

The Fourth Issue – the CanCan Girl

On the obverse of both the 1 oz Silver CanCan Girl Round and the 1 oz Copper CanCan Girl Round, you will find the exclusive fourth release of the collection. This design takes you inside of a Wild West saloon. As the bartender dries a mug and a patron looks on from the bar, a musician plays the piano as a young woman dances the CanCan to entertain the patrons of the bar. There is only one inscription on this side of the round and it includes the words “CanCan Girl.”

The expansion of the American frontier was built one small town at a time as prospectors moved west in hopes of striking it rich. From Colorado to Nevada, New Mexico, Arizona, and California, Americans moved west hoping to find a better life bankrolled by luck if they could find gold or silver in some of the vast deposits discovered in the mid-19th century. Many of these towns were built around a dirt main road with boardwalks connecting the various establishments on main street. The common reverse imagery on Prospector Series rounds captures everyday life on main street in a small prospecting town. Citizens walk the dirt main road as a patron leaves the saloon and others walk along the boardwalk in front of the hotel.

As with the previous three releases in the Prospector Series, the CanCan Girl rounds are available in two metallic options. The silver round contains 1 Troy oz of .999 pure silver while the copper round contains 1 AVDP oz of .999 pure copper. Both options are available for purchase inside of individual protective plastic flips, in tubes of 20 rounds, or in boxes of 500 rounds that include 25 tubes of 20 rounds each.

History of the Series

The Prospector Series is exclusive to Provident Metals and launched with the Prospector design capturing the image of an old prospector walking along with his pack mule. His life’s possessions and all the tools of his trade are packed on the mule’s back as the two continue their search for wealth in the West. In the second design of the series, the gunslinger design appeared. Death was a common theme in the Wild West. Gunslingers often played a role in that death theme. Some gunslingers were nefarious characters who killed for sport or to steal the riches of others, while other gunslingers were noble figures who stood up for law and order.

The third design honored the role of the Pony Express in keeping the American West connected to the well-established cities of the East Coast. Prior to the vast expansion of the American rail network and the invention of the telegraph, the US Mail relied on a series of riders going at breakneck speed from one post to the next, switching horses at each stop, to deliver mail across the west.

The can-can, or cancan, is a form of high-energy, physically demanding dance that originated in French music halls in the 1840s. Originally performed by men and women, the cancan’s history in America primarily featured women performing the dance. It consists of a series of high kicks, cartwheels, and splits with the dancers manipulating skirts and petticoats as part of the pomp-and-circumstance in the performance. In Wild West saloons, women performed the dances to entertain locals and visitors alike and keep them in the saloon spending money. The cancan remains popular in France to this day in cabaret acts.

The CanCan Girl Rounds are available for presale now at Provident Metals to help you complete your collection of Prospector Series silver and copper rounds. The products are expected around January 2020 and will only be available for a limited time.  Be on the lookout for a new release in 3 months as we continue this Prospector Series.  If you have questions about this release or the broader series, please contact us at 800-313-3315. You can also chat with us live online or email us with your inquiries.