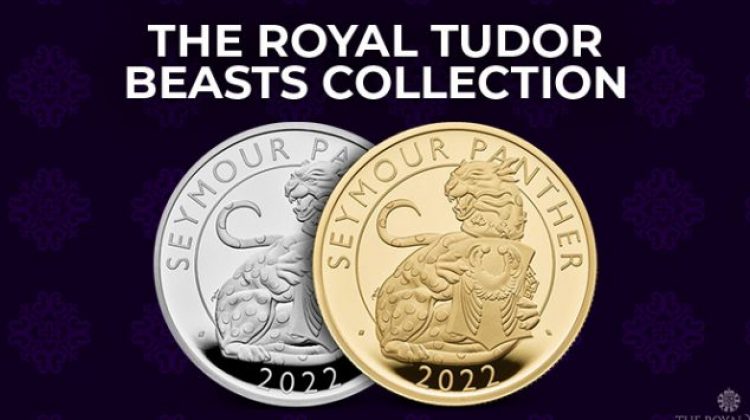 The Royal Mint’s Queen’s Beasts Series was available from 2016 to 2021. This collection chronicled the heraldic beasts representing various houses that controlled the monarchy over the course of the last 800-plus years. From the Lion of England adopted by King Richard I in 1198 to the White Horse of Hanover that came to the Royal Arms in 1714, these animals featured in the personal badges and Royal Arms of various monarchs. Now, the Royal Mint builds on the success of that series by offering a new 10-coin series focusing on one dynasty: the House of Tudor.

For the reverse side of the 2022 Proof British Tudor Beast Seymour Panther 10 oz Silver Coins, and all other options in the series, you will find the Seymour Panther. Gifted to Jane Seymour by King Henry VIII upon their marriage, the Seymour Panther design features a spotted panther that is seated behind a shield. The shield it supports has the Seymour Wings, a set of wings joined at the center with the wingtips pointing downward. The inscriptions on this side of the coin include SEYMOUR PANTHER and 2022.

On the obverse of 2022 Proof British Tudor Beast Seymour Panther Coins is the definitive fifth-generation portrait of Her Majesty, Queen Elizabeth II. The Queen is shown here in right-profile relief at the age of 89 wearing the George IV State Diadem Crown on her head. The field includes inscriptions of 10 POUNDS, ELIZABETH II, and D.G. REG. F.D. Please note that each of the coins has its own face value noted. 10 Pound sterling is the face value of the proof 10 oz silver coin.

The Royal Mint of England has various options available in the new Tudor Beasts Series. In this first design release, Provident Metals carries the following options for collectors:

History of the House of Tudor

Henry Tudor would go on to marry Elizabeth of York, the eldest daughter and only heir of the first Yorkist king, Edward IV. Henry ruled as King Henry VII. The most famous monarchs of the Tudor Dynasty were King Henry VIII and his daughter by Anne Boleyn, Queen Elizabeth I. These two monarchs are widely credited with strengthening the power of the crown and leading to the dawn of the Renaissance in England.

Hampden Court was the seat of power for the Tudor monarchs and its entrance over Moat Bridge showcased the royal symbolism of the House of Tudor. Along this bridge, you will find 10 stone statues with symbols like the Seymour Panther. The planned release will showcase all of these beasts, from the Seymour Panther, the Tudor Dragon, the Seymour Unicorn, the Royal Dragon, the Queen’s Lion, and the Queen’s Panther, to familiar beasts in the form of the Black Bull of Clarence, the Yale of Beaufort, the Greyhound of Richmond, and the Lion of England.

Get Your Tudor Beasts While Still Available!

The coins in this series are extremely limited in number. Once these coins are live, you won’t want to wait to add them to your collection. We are available to assist you at 800-313-3315, online using our live chat, and via our email address. You can also follow us on Facebook and read our weekly blogs for more information on upcoming releases.