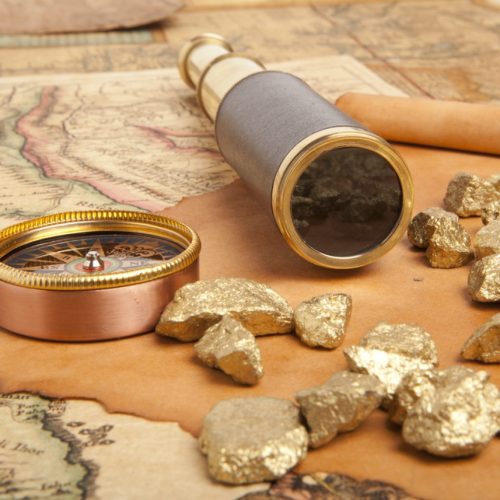 The use of gold—in art, religion, medicine, and currency—spans back centuries and touches almost every known culture. Why was gold such a coveted precious metal? Because gold has such a brilliant color and doesn’t corrode, it became a symbol for immortality and power in many ancient cultures. Records of underground gold mining date back to 2000 BCE in Egypt, followed later by the Romans in Portugal, Spain, and Africa.

Some cultures used gold predominately for artwork and religious purposes, while others used the resource monetarily. But one thing is for sure: gold was universally sought out. In fact, the search for gold is what what led Christopher Columbus to set sail from Spain in 1492 and accidentally discover America.

Even though most nations now use paper money that is not backed by stores of gold (known as fiat currency), gold and other precious metals are still sound investments. This is especially true during times of crisis and economic uncertainty. Where fiat money has been known to eventually fail, gold has endured the test of time. Let’s explore a brief summary of gold’s cultural significance across the globe.

Ancient Egyptians believed that gold was symbolic of the flesh of the gods, which led them to use gold in funeral rituals. Many tombs of pharaohs contained lavish gold decorations and offerings, including within the sarcophagi that encased mummies. Wall paintings depict the Egyptians’ process of goldsmithing, from weighing the metal to displaying the finished item. These artisans developed many techniques, some of which are still used—albeit in a refined form—today.

Using gold as a form of currency originated in ancient Greece, with the creseid being the oldest known coin. Early gold coins were irregular in shape and stamped only on one side. This monetary tradition was later refined in Rome. From the fifth to third centuries BC, gold became important for Greek trade. And the growing economic value of gold meant that less of the precious metal was being used artistically. However, the dead were buried with their jewelry and other valuable items so they could continue to “live” in the afterlife.

As ancient Roman culture began to rise, the area attracted artisans who used gold to create jewelry, pots, and other items that were found in upper class homes. Under Emperor Augustus, the Romans constructed aqueducts inside of Spanish mountains to further utilize the region’s resources. Then under Julius Caesar, the Roman monetary system centralized around gold. Coins were minted in the image of emperors. From this point, monetary value was the primary use for gold, and other uses grew less popular.

From around 1100 BC, gold became a common material in jewelry and especially for elaborate temple decorations. The Forbidden City in Beijing is one of the most well-known examples, which features golden furniture, ornaments, draperies, and accessories. Japan is also home to temples that are decorated entirely in gold. Additionally, the largest solid gold statue in the world is found in Bangkok, Thailand. The Golden Buddha was created between 1600 and 1750.

One of the primary uses for gold in Africa was to decorate the courts of cultural leaders. Golden artifacts produced for ceremonial purposes were often very elaborate. A secondary use for gold was exportation, predominantly from Ethiopia, Sudan, and the Bantu region.

Though gold did not have market value in this region, it maintained cultural significance. Gold was correlated to solar deities, and it was mostly used for religious and decorative purposes.The Aztecs built large temples that were adorned with golden coins and statues. The Mayans used gold for trade, along with religious and funeral rites. The Incas were known to build temples dedicated to the sun, filled with golden decor and objects that were worn during sacred rituals (such as masks and sun disks). It was in this region that the legend of El Dorado rose, due to a ritual in which future kings were covered in powdered gold during coronation ceremonies. Eventually, the Aztecs and Incas were plundered and wiped out by the Spanish conquistadors as they searched for gold.

The use of gold became popular in Europe during the Middle Ages and Renaissance. Churches and religious artifacts were decorated with gold, as is took a central role in Christian worship. Gold also became representative of the government’s image, as seen in the clothing and accessories of kings, emperors, and popes. During the first century BCE, gold was used in this region for medicinal purposes to treat wounds that were afflicted by “magic potions.” And beginning in the 7th century BCE, gold was used for dental work when setting in substitute animal teeth.

Gold has been prized throughout the ages, resulting in economic, religious, and social significance. Even today, gold is one of the safest investments since it’s proven to remain a valuable asset. Many people have chosen to invest in gold as a protection against an uncertain economy, whether in the form of gold bullion or other types of collections.

Have you joined the ranks of those who have invested in gold? What tips do you have for individuals who are new to investing?