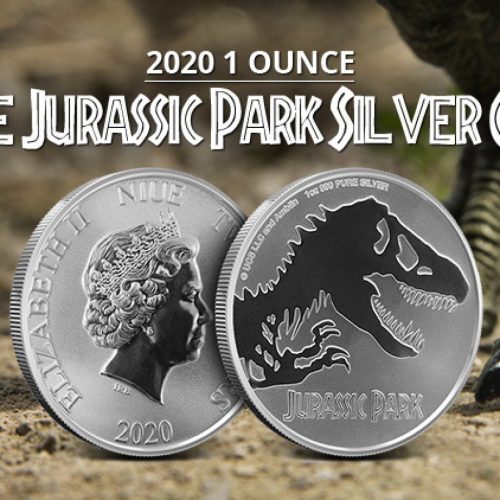 In 2020, the world celebrates the 30th anniversary of the release of a novel that brought beasts from the prehistoric world into the modern era. Michael Chrichton’s science-fiction novel, Jurassic Park, was published in 1990 and would later spawn a series of feature films that captivated viewers at the box office. With renewed interests in the concept of a failed dinosaur theme park with genetically engineered dinosaurs, Niue celebrates with the iconic original logo for the franchise. The latest Niue silver coin release offers the well-known Jurassic Park logo on a limited-issue silver bullion coin. 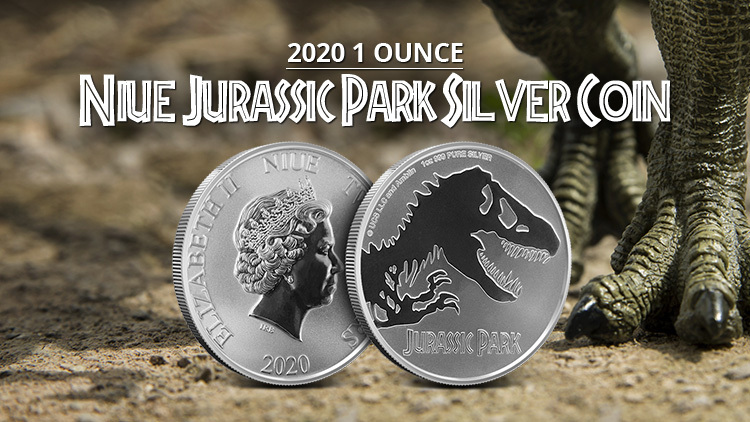 The reverse design element of the 2020 Niue Jurassic Park 1 oz Silver Coins includes the logo from the Jurassic Park franchise. Featured in right-profile relief, the skeleton of a T-Rex bursts into the design field from the left. The skeleton has its mouth open to brandish its sharp, deadly teeth. The T-Rex is the primary protagonist in the original Jurassic Park films as it hunts down the main characters of the feature film when the park fails and the dinosaurs go rogue. Inscriptions on this side include “Jurassic Park,” “UCS LLC and Amblin,” and “1 oz 999 Pure Silver.” The design featured on this side is officially licensed content from Universal Studios and Amblin Entertainment.

On the obverse face of 2020 Niue Jurassic Park Silver Coins is the beautiful portrait of Queen Elizabeth II. In use since 1998 when Ian Rank-Broadley created this portrait for the Royal Mint of England, the right-profile bust of the Queen shown on this side has been in production on circulation and bullion coinage for more than two decades now. While it featured on British coins from 1998 to 2015, it was used on Australian coins from 1999 to 2018 and continues to feature on Commonwealth coins for nations such as Tuvalu, the Cook Islands, and Niue. This side of the coin has inscriptions that include “Elizabeth II,” “Niue,” “Two Dollars,” and “2020.”

Issued with 1 Troy oz of .999 pure silver, the new 2020 Niue Jurassic Park 1 oz Silver Coin has a face value of $2 (NZD) that is fully backed by the Niuean government. The coins are available individually with protective plastic flips. Multiples of the coins will either ship inside of a mint tube of 20 coins or a Monster Box of 500 coins. The Monster Box contains 25 tubes with 20 coins each. All coins are in Brilliant Uncirculated condition and this design release is limited to a total of 10,000 coins only.

The Jurassic Park storyline is one that has played out time and again across six feature films in the franchise. Michael Chrichton’s original 1990 novel focused on genetic engineering that brought dinosaurs back to life in the modern world using DNA extracted from mosquitos trapped in amber 65 million years ago. The dinosaur DNA is crossed with DNA from modern birds to bring the dinosaurs back to life. The point of reviving the dinosaurs was to create a one-of-a-kind theme park where humans and dinosaurs could coexist for the first time in history.

Chrichton’s novel is considered one of the signature releases of his career. Before it was even published, four major film studios submitted bids for the film rights to the story. Universal Studios eventually emerged as the winning bidder, with Steven Spielberg lined up as the director and the rights to the story acquired for $1.5 million. Following the novel’s release, Chrichton was hired to help adapt the novel into a feature film screenplay and paid an additional $500,000 for his work.

In 1993, Chrichton’s Jurassic Park hit the big screen and went on to become the highest-grossing film of the year. Jurassic Park made $914 million in total at the box office and was the highest-grossing film ever until 1997. The popularity of the novel and film resulted in Chrichton writing a second novel, The Lost World in 1995. His second novel was adapted for film and released to theaters in 1997. The final film in the franchise directly inspired by Chrichton’s original novels was 2001’s Jurassic Park III. In recent years, the series has enjoyed a revival with the release of Jurassic World in 2015. That was followed by Jurassic World: Fallen Kingdom in 2018 and the upcoming sequel Jurassic World: Dominion set for a 2021 release.

With a limited mintage, the 2020 Niue Jurassic Park Silver Coin won’t be available for long. Please feel free to reach out to Provident Metals with your questions. Our team is available at 800-313-3315, online using our live chat, and via our email address. You can also follow us on Facebook for daily and weekly updates, and read our weekly blog posts for greater insight and detail on new releases.