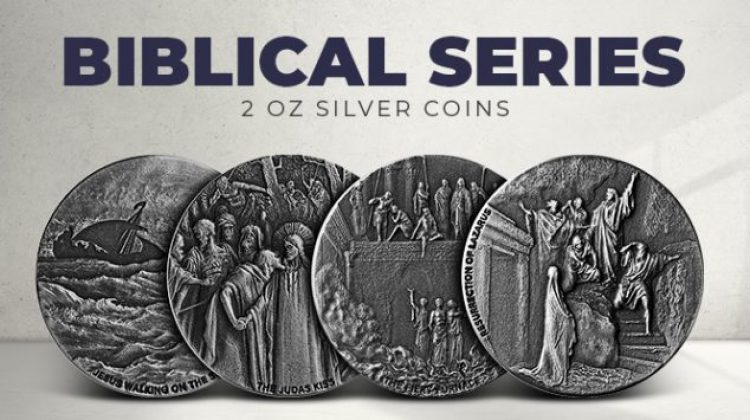 The Scottsdale Mint introduced its Biblical Series of 2 oz silver coins in 2015. The collection offers six new designs each year that come from the works of Gustave Dore. In 1866, Dore completed his illustrations for the Bible, a series of 241 wood-engravings that depicted some of the most important stories from the Old Testament and New Testament of the Bible. As the series enters its sixth year in production, the 2020-dated designs are still arriving with dealers and represent one of the more prominent examples of Niue silver coins. Provident Metals offers a peek at the designs from the 2020 Biblical Series in this week’s blog post.

With each year of issue in the Biblical Series, the Scottsdale Mint offers up six designs. None of the issue years has a specific focus on certain books or broader themes from within the Bible, but it is worth noting that the 2020 Biblical Series features depictions of three different miracles from the Bible in its six releases. The 2020 designs include the following images:

In the obverse design of all 2020 Biblical Series silver coins, the Scottsdale Mint has chosen to feature the third-generation effigy of Queen Elizabeth II from the Royal Mint of England. Designed by Raphael Maklouf in 1985, the design was featured for just over a decade on British coins until it was replaced in 1998. The right-profile bust of the Queen includes a necklace resting on her shoulders, earrings in her ears, and the George IV State Diadem Crown upon her head. The inscriptions include “Queen Elizabeth II,” “2 oz 999 Fine Silver,” “Niue Two Dollars,” and “2020.”

The coins of the 2020 Biblical Series come with beautiful packaging perfect for the display of these beautiful silver coins. Each coin is housed in a felt-lined packaging set inside of a box made to resemble the Bible. On the other interior side of the box is a Certificate of Authenticity from the Scottsdale Mint that includes the passages from the Bible that reference the design on the reverse of each release. The matching serial number is also on the COA.

2020 Biblical Series silver coins are limited to a total mintage of 1,499 coins per design. There is a laser-engraved serial number on the edge of each coin, identifying its position between “1” and “1,499” in the production of the coins. All coins have 2 Troy oz of .999 pure silver with a face value of $2 (NZD) from Niue. Each coin also features a rimless blank with an antique polish that gives each piece an ancient appeal.

History of the Illustrations of the Bible

The designs in this series come from Gustave Dore’s expansive works known informally as illustrations of the Bible. The works were commissioned in 1866 following several successful portfolios of work completed by Dore throughout the prior decade for British publishers. Dore, a French artist, and illustrator, was then chosen as the illustrator to develop new images for a deluxe edition re-release of the 1843 French-language Vulgate Bible. Known as the Bible de Tours, Dore’s work in the series became known as the illustrations for La Grande Bible de Tours. In all, his portfolio included 241 wood-engravings with 139 plates capturing scenes from the Old Testament, 81 plates representing the New Testament, and 21 from the Apocrypha.

Make sure you turn to Provident Metals to keep your Biblical Series on track with the new 2020 designs. Our customer service team can field your questions on the phone at 800-313-3315, online through our live chat, and via our email address. Remember to read our weekly blog posts and follow us on Facebook for more information on coin programs and upcoming releases, as well as daily and weekly deals on precious metals.