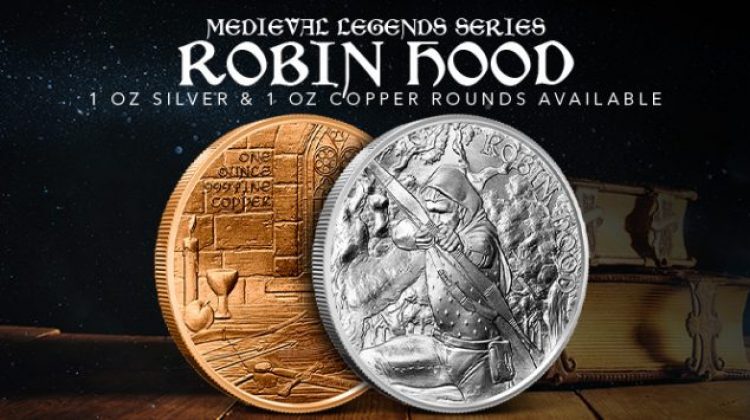 Fans of distinctive bullion collections, folktales, and the legendary stories of the Medieval Era have something fun to look forward to in the months ahead. In August 2021, the new Medieval Legends Series launched with a plan for seven distinct designs honoring some of the larger-than-life figures praised in Medieval Era folktales. The first release of this new series, the Robin Hood Round, is now available at Provident Metals and offers reason to be excited about the series as a whole.

Rounds in the Medieval Legends Series

The obverse field of Medieval Legends Robin Hood Rounds features the hooded archer. He is shown in the design wielding his preferred weapon, a bow and arrow. He is shown in a front-facing relief as he draws an arrow back in his bow and prepares to fire at his target. The lush surroundings of Sherwood Forest feature throughout the background field behind his figure. Along the right side of the design edge, you will see his name inscribed as ROBIN HOOD.

On the reverse side of all Silver and Copper Medieval Legends Rounds, you will find the same design. Throughout the series, the collection will feature the tools of a Medieval writer and some items for inspiration. There is a humble wooden table in the foreground with an apple and chalice for sustenance for the individual jotting down the tales of Medieval folk heroes. The design element includes an ink well, quill, and parchment for the writer to tell the tale of Robin Hood, and others, as well as some weapons, to inspire the thoughts of the writer. The room featured is set in a Medieval Era castle with stone walls and a stained glass window. Inscriptions on this field read either ONE OUNCE .999 FINE COPPER or ONE OUNCE .999 FINE SILVER, depending on the version of the round.

Somewhere between truth and fiction, the story of Robin Hood emerged during the Middle Ages in England. There is no written record of a Robin Hood figure from England during this period, but that hasn’t stopped people from creating a story surrounding the legend of the bandit of Sherwood Forest. His tale has been told and retold countless times over the centuries, with certain details and characters coming and going from the story. What remains consistent is that Robin Hood is a crusader for the most vulnerable population within England, the poor. Distraught at the overtaxing of the people by local tax collectors and the Crown, Robin takes to Sherwood Forest to hideout and fights back by robbing the rich to give back to the poor.

If you plan to follow the Medieval Legends Series through to its conclusion, then you’ll want the custom Provident Metals Medieval Legends Series 14-Piece Collector’s Box. This special box comes with the Provident Metals logo on its lid and a scroll-themed shipping sleeve with the series name on it. Inside, there are 14 inset spaces: one for each design in silver and copper.

Go Medieval with the Robin Hood Design at Provident Metals

You won’t want to miss any of the designs in this beautiful round series. The Robin Hood release is available only for a limited time before the next design in the series is made available. Provident Metals’ customer service is here to assist you with questions at 800-313-3315, online using our live chat, and via our email address.