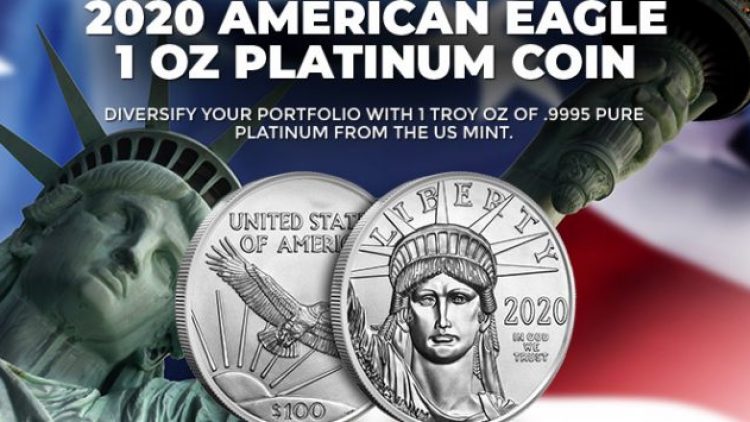 Historically speaking, platinum has had some of the highest spot prices among precious metals. Until the Great Recession sent gold surging forward, platinum had a higher value than the popular yellow metal. Recent years have seen platinum shrink as gold held steady and palladium has surged to the top of the heap. Platinum is an increasingly attractive option for those looking to diversify away from the cost of gold and looking for more than what silver currently has to offer. One of the longest-running and most respected bullion coin options in this metal is the American Eagle 1 oz Platinum Coin. Right now, Provident Metals has the 2020 American Eagle 1 oz Platinum Coin on pre-sale for those looking to get a jump on the latest issue of the popular bullion coin.

The 2020 American Eagle 1 oz Platinum Coin is available right now on pre-sale in the 1 oz weight only. The US Mint once produced the bullion coin in three fractional-ounce coins, but as of 2014 it is only available in this current weight. The coins have 1 Troy oz of .9995 pure platinum and a face value of $100 (USD), the highest denomination among annual US bullion coin releases. Coins are housed individually inside of protective plastic flips or in mint tubes of 20. If you purchase multiples of 100, the coins arrive in a Monster Box with a total of five tubes included inside.

The obverse field of the 2020 American Eagle 1 oz Platinum Coin has the long-standing Liberty design from John Mercanti. Created in 1997 for this series, this vision of Liberty depicts her figure from the Statue of Liberty. Her stoic face keeps a fixed gaze on the horizon as her right hand rises beyond the field of view holding up her torch. Her crown spikes to the edges of the design field where you will notice “Liberty” inscribed. Other inscriptions on this side include the date mark of “2020,” the national motto “In God We Trust,” and the phrase “E Pluribus Unum” within the robes of Liberty. A subtle “JM” initial is found near the braids to the left of Liberty’s head.

On the reverse face of 2020 American Eagle 1 oz Platinum Coins is a design that has featured on this coin since 1997. Designed by former US Mint engraver-sculptor Thomas D. Rogers, this image is known as “Soaring Eagle over America.” It shows the American bald eagle with its wings at full stretch as it glides above the country with the sun rising over the horizon in the distance. Within the continent, you will notice the face value “$100,” while “United States of America” and “.9995 Platinum 1 oz” in the background.

The platinum bullion coin market is incredibly small when compared to the gold and silver bullion markets. Many of the current major platinum coin programs were introduced between 2016 and 2018. The Somalia Elephant and Austrian Philharmonic debuted platinum bullion coins in 2016. The Royal Mint of England expanded its Queen’s Beast 10-coin series in 2017 to offer the designs in platinum. In 2018, the Perth Mint introduced the Australian Kangaroo platinum coin and the Royal Mint of England debuted its first British Britannia in platinum. Only the Canadian Maple Leaf and American Eagle have a more established track record.

So why consider the Platinum Eagle now? Simply put, platinum offers a great option to diversify against gold, palladium, and silver holdings. Just one year ago on January 24, 2019, palladium was trading at $1,326.00 per ounce. This week in January 2020, it has been hovering around $2,500 per ounce. That same time last year, gold was trading at $1,281.42 per ounce and is now pushing its way toward $1,600 per ounce as of this week. Platinum, meanwhile, was at $802.50 last year on January 24th and was as low as $872 per ounce just over two months ago on November 12, 2019. Just creeping back to the $1,000-per-ounce mark, platinum has room to grow with greater affordability in the moment than its competitors.

If you’re considering the 2020 American Eagle 1 oz Platinum coin, you can now claim your coins through Provident Metals. Please don’t hesitate to ask questions of us by calling 800-313-3315. You can also reach out to us live online using our chat service or connect with us in writing through our email address.