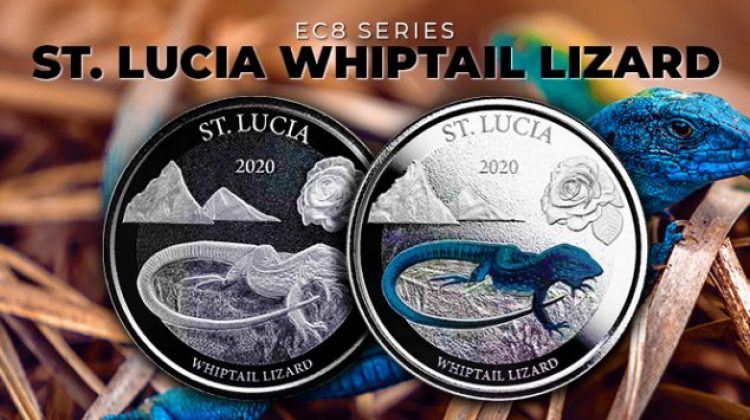 Silver enthusiasts buying silver in the EC8 Series from the Scottsdale Mint have a lot of options for investing and collecting in Caribbean silver. The coins in this series represent eight different nations in each release date starting with the debut issues in 2018. You can purchase all eight designs in each date mark, or maybe focus on collecting each release for a specific island. Maybe it’s your favorite Caribbean destination or you just like the designs representing that specific island. There’s no wrong reason for buying the foreign silver coins in the EC8 Series. If you’re building on your broader EC8 Series or have focused on St. Lucia from the get-go, the latest release for the beautiful island in the southern Caribbean is now available from Provident Metals in its BU and colorized proof issues.

Known on the island of St. Lucia as the Zandos by the locals, the whiptail lizard is the only member of its species native to the West Indies. In the reverse design of 2020 St. Lucia Whiptail Lizard 1 oz Silver Coins, you will find a depiction of the Cnemidophorus genus of lizard stretched out on a rock to take in the heat and sunshine of the Caribbean. In the background field, the towering Pitons of Gros and Petit Piton rise from the Caribbean toward the sky. The Pitons are a highlight feature for any tourist visiting the island as a pair of dormant, collapsed volcano domes. The St. Lucia rose, the national flower, is featured above the whiptail lizard. Inscriptions include “St. Lucia,” “2020,” and “Whiptail Lizard.”

For the obverse design field of 2020 St. Lucia Whiptail Lizard Silver Coin, the Scottsdale Mint uses its own effigy of Queen Elizabeth II. The portrait of the Queen found at the center of the design comes from the Royal Mint of England. Ian Rank-Broadley designed this effigy of Her Majesty in 1998 to serve as a fourth-generation portrait during her reign. Used on British coins from 1998 to 2015, it remains popular among Commonwealth nations to this day. The Scottsdale version is unique in its inclusion of large branches framing the image of the Queen. The inscriptions on this face read “Eastern Caribbean Central Bank,” “1 oz .999 Silver,” “Queen Elizabeth II,” and “Two Dollars.”

The coins of the 2020 St. Lucia release in the EC8 Series include the 2020 St. Lucia Whiptail Lizard Silver BU coin and the 2020 Proof Colorized St. Lucia Whiptail Lizard 1 oz Silver Coin. The BU release in the series is a traditional Brilliant Uncirculated coin that is available with individual plastic flips or Scottsdale Mint skin boards of five coins. The skin board individually seals each of the five coins so you can separate each without unsealing the individual pieces. The BU coin is limited in mintage to 25,000 silver coins only.

As for the proof colorized coin, the maximum mintage is far lower at just 500 silver coins in total. Each one is securely packaged inside of a protective plastic capsule with a black presentation box for display and a Certificate of Authenticity. The proof colorized coins have lacquers in various shades of blue applied to the body of the whiptail lizard in the reverse design element.

History of the EC8 and ECCB

The EC8 Series debuted at the Scottsdale Mint in 2018 with the release of the Antigua & Barbuda Rum Runner design, the first in the annual release cycle each year. St. Lucia has traditionally featured in the middle of the eight-coin release cycle with each date mark. The eight nations represented in the series include Dominica, Grenada, Montserrat, St. Kitts & Nevis, St. Vincent & the Grenadines, and Anguilla alongside the two above-mentioned nations. These eight nations are the primary users of the Eastern Caribbean dollar as the fiat currency of the island. In general, the members of the Eastern Caribbean Central Bank, the monetary authority behind the XCD. However, Anguilla is unique among these nations in one way.

The other seven nations are founding members of the Organisation of Eastern Caribbean States (OECS). The OECS supported the founding of the ECCB to serve as a monetary authority and market stabilizer for the nations of the Eastern Caribbean. However, not all of the nations in the EC8 Series are full OECS members. In fact, not all OECS members even use the XCD. Anguilla, for its part, is unique in that it is an associate member of the OECS, but uses the XCD and follows the authority of the ECCB in monetary issues, even though it is a British Overseas Territory. The British Virgin Islands, another British Overseas Territory, is an associate member of the OECS but uses the US dollar as its currency. Guadeloupe and Martinique are also associate members in the OECS, but as overseas departments of France, both islands use the Euro.

Keep Up With EC8 Releases at Provident Metals

Now is your chance to build on your existing EC8 collection or keep up with your St. Lucia coin purchase by getting the St. Lucia Whiptail Lizard Silver Coins. Provident Metals’ customer service is available to you at 800-313-3315, online using our live chat, and via our email address. We are also active online using our Facebook profile and provide weekly blog posts that offer a deeper look at new releases in our inventory.