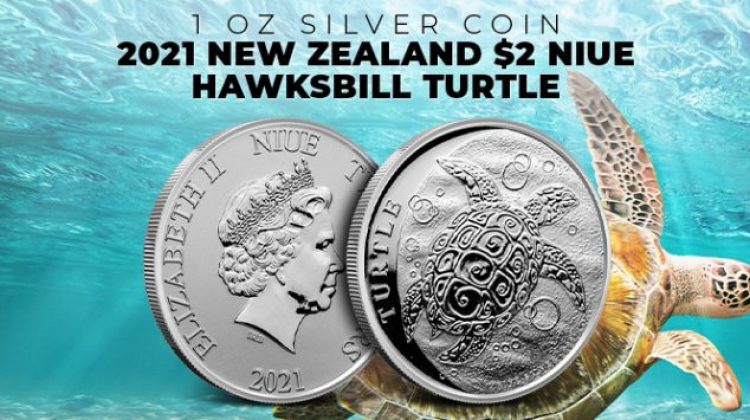 The New Zealand Mint is a private mint located in Auckland that is the largest mint of its kind in the country. Though it is not the sovereign mint of New Zealand, it does produce a range of authorized bullion coins for nations throughout the South Pacific. One of its most respected collections is the Niue Hawksbill Turtle Series, a collection of silver and gold coins that originally started out as an issue for Fiji. The Niue silver coins in the Hawksbill Turtle Series are anchored by the 1 oz silver option, the most popular choice in the collection. Take a moment to learn more about the latest issue, the 2021 Niue Hawksbill Turtle.

The obverse field of the 2021 New Zealand $2 Niue Hawksbill Turtle 1 oz Silver Coin features an effigy of Queen Elizabeth II. As a Commonwealth Nation, Niue uses the effigy of Her Majesty on its coinage. This design has been on the obverse of Niue Hawksbill Turtle Coins since the introduction of the series in 2014 and captures the Queen in a popular design created in 1998 by Ian Rank-Broadley. The Queen wears her favorite tiara in this design, the Girls of Great Britain and Ireland Tiara. The inscriptions on this face of the coin include ELIZABETH II, NIUE, 2 DOLLARS, and 2021.

On the reverse side of 2021 $2 Niue Hawksbill Turtle 1 oz Silver Coins is an image of the namesake creature for the series. The Hawksbill Turtle resides in the warm waters of the South Pacific. It regularly transits the waters between the north island of New Zealand to its breeding grounds off Fiji and other islands in the South Pacific, such as Niue. The hawksbill is known for its large, hooked beak and its colorful, plated shell. The design element includes the turtle with bubbles around it helping create the illusion that it is swimming through waters in the South Pacific. There is a crescent-moon shape on the left with an inscription of TURTLE. Other inscriptions include FINE SILVER 999 1 OZ.

Details of the Series

Although larger weights have been issued in the series, such as 10 oz and 5 oz silver, the popular weight from the collection is the annual 1 oz silver coin. Featuring 1 Troy oz of .999 pure silver and a face value of $2 backed by Niue, the collection comes with plastic flips for individual coins and tubes of 20 for multiples.

History of the Hawksbill Turtle

The New Zealand Mint introduced the Hawksbill Turtle in 2010 as the Fiji Taku. At that point in time, the coins featured the same obverse and reverse designs you will find on the coins today. There are two important differences from this time period with the Fiji Taku and the modern Niue Hawksbill. First, the sliver of space on the reverse with the TURTLE inscription on these coins originally read TAKU, the native Fijian word for the hawksbill turtle. Additionally, after political unrest in Fiji in 2012/2013, the obverse field was changed from the effigy of Queen Elizabeth II to include the Fijian coat of arms in 2013. In 2014, the New Zealand Mint changed altogether to offer the coins to the island of nation of Niue.

The New Zealand Mint is the only private mint in New Zealand, and even though its name bears connotations of a sovereign mint, it is not an official mint for the nation of New Zealand. The mint focuses on producing bullion coinage and commemorative collections for nations like Niue and the Cook Islands. New Zealand coinage is produced overseas, largely by the Royal Canadian Mint. The New Zealand Mint has a history of more than four decades producing gold and silver bullion with minimum purities of .9999 and .999, respectively.

The silver coins from the Niue Hawksbill Series are available at Provident Metals and our team is waiting to assist you with any questions. We can be reached on the phone at 800-313-3315, online using our live chat, and via our email address. Don’t forget to follow us on Facebook and read our weekly blog posts for more information on coin programs and other bullion collections from Provident Metals.