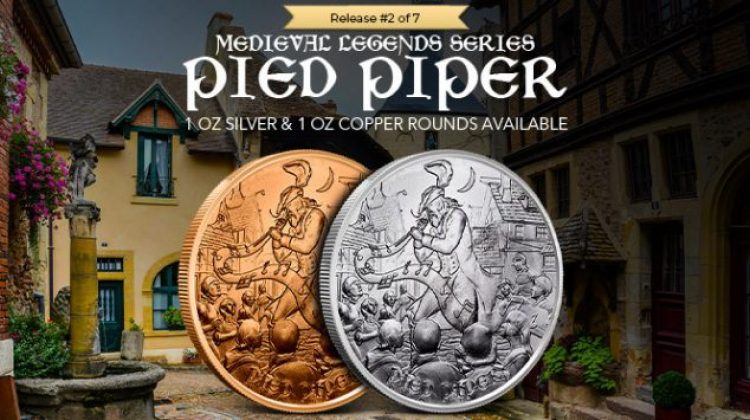 Made famous by the likes of Johann Wolfgang von Goethe and the Brothers Grimm, the Pied Piper is a folk legend from the 14th century in Hamelin, Lower Saxony, Germany. Like Robin Hood before him, the true background of the tale is open to interpretation and debate, and the conversation has continued for more than 700 years. No matter your take on the truth or fiction of the Pied Piper, one thing is certain; this round is a fitting continuation of the Medieval Legends Series at Provident Metals.

The design on the obverse of the Medieval Legends Pied Piper Rounds features the mythical rat-catcher of Hamelin in one of the darker twists on his tale. The Pied Piper is so-named because he has a magical pipe that he uses to bring rats under his spell and lead them out of town. However, one twist on his legend is that he exacts terrible revenge on towns that fail to pay him for his service. He will come back in the night and use his musical pipe to lure away the children of the village to an uncertain, and no doubt horrible, fate. In this design, musical notes emerge from the end of his pipe on a moonlit night as the children of the village begin to gather around.

Background on the Pied Piper

German writers such as von Goethe and the Brothers Grimm wrote about the Pied Piper in the 18th and 19th centuries, but the history of this figure actually dates back to around the year 1300 at the beginning of the 14th century. This is the first known record of the Pied Piper and it comes from a work of art in a stained glass window that was installed in the church in the town of Hamelin in Germany.

While folk writers brought a dark side to the story of the Pied Piper, it is believed the legend had a more upbeat origin story in 1300s Hamelin. He was called the Pied Piper because the earliest depictions of his appearance speak of a man dressed in multicolored, or pied, clothing. He is simply referred to at the time as a rat-catcher who uses a magic pipe to lure rats away from towns. There is a belief among many that his origin story is a symbol of hope in Hamelin. During this period of European history, the plague was active on the continent and killed hundreds of thousands. As we know today, rats were one of the biggest carriers of the plague. As such, the idea of a man leading away the source of a viral outbreak would be one of hope rather than a dark tale.

Reception of the Medieval Legends Series

The launch of the Robin Hood design to debut the Medieval Legends Series in 2021 resulted in strong demand from investors and collectors. The series does not place mintage caps on each design, however, the designs are only produced for a limited period of time. Once the next design is ready, the previous design is retired. The Robin Hood launch resulted in sales of 64,220 silver rounds and 40,000 copper rounds.

Now’s the best time to continue your collection with the purchase of the new Pied Piper Rounds in the Medieval Legends Series. Please contact Provident Metals if you have any questions. You can call us at 800-313-3315, chat with us live online, or email us directly. Don’t forget to house your rounds individually in the complete Medieval Legends Series 14-Piece Collector’s Box that includes the Provident Metals logo on the exterior of the lid!