During the month of February, Valentine’s Day is celebrated in many places around the world. It’s a day to show your loved ones how much they mean to you. But do you know the origins of this holiday of romance?

The exact history of Valentine’s Day—and Saint Valentine—is not fully known, but we do know that the modern St. Valentine’s Day stems from both Christian and ancient Roman tradition. There are two prevalent tales the offer some insight.

The first tells of a third century Roman priest named Valentine who performed marriages in secret. This was because Emperor Claudius II outlawed marriage, believing that single men made better soldiers than those with families. When Valentine’s actions were discovered, he was sentenced to death.

The second story tells of an imprisoned Valentine who sent the first “valentine” note after falling in love with the jailer’s daughter. He allegedly signed a letter to her “From your Valentine,” an expression that is still used today.

We may never know the exact origins of Valentine’s Day, but one thing we do know is that it’s a holiday steeped in romance and sweet, loving gestures. If your loved one enjoys collecting precious metal bullion, perhaps a silver round or bar might be a nice treat to show how much you care. And while you’re shopping, why not try your hand at winning some free silver! 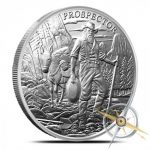 You can enter our giveaway simply by mentioning one person/animal/event/thing that you love. Commenting below will serve as your entry for our February giveaway. But remember to keep it classy; inappropriate comments will be deleted and disqualified. Submit your comment (one comment only please) by February 25, 2018. One winner will be randomly selected on February 26, 2018 to receive a Provident Prospector 1 oz silver round. This Provident exclusive is a new redesign of an old favorite, and we expect to release more designs in the series soon.

Good luck and remember to spread the love!