The Pale Horse of Death, from Provident’s Four Horsemen of the Apocalypse series, has concluded its run and been discontinued. The fourth and last release in the 4H series was available for three months and the series has now reached an end after a year of success.

One of the joys of collecting a limited series is the relative rarity of the rounds produced during the run. After the Pale Horse came to an end over the weekend, we crunched the numbers in order to provide you with accurate mintage information.

Final Mintage numbers for each rounds are as follows:

Each of these rounds maintains notable performances on the secondary market, consistently selling for more than their original price. 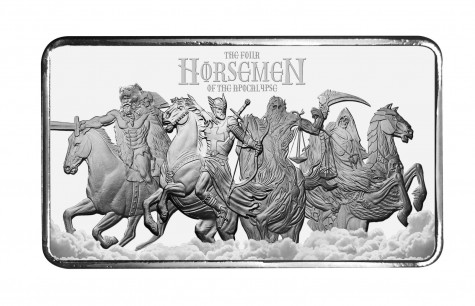 The end of the individual 4H rounds does not mean the series is over for good. You can still buy a number of NGC-graded rounds sealed in plastic holders with a custom series labels, in both proof and antiqued finishes. Additionally, the Four Horsemen 10 oz Silver Bar will be available as long as demand remains strong.

Thank you for supporting the Provident-exclusive Four Horsemen series! Which design was your favorite? Let us know in the comments section below.