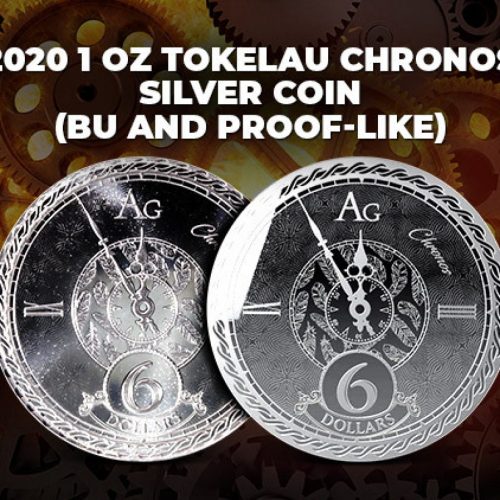 Most forms of silver bullion are available as one type throughout the history of the piece. For example, products like the American Eagle and Canadian Maple Leaf debuted as silver bullion coins and have always been offered with a legal tender face value. The Tokelau Chronos Silver Coin is a unique series. Launched in 2015 as a 1 oz silver round collection, the design concept transitioned to a legal tender series in 2019. The 2020 Tokelau Chronos Coin is just the second issue of the product as a legal tender silver coin and now has a new face value as well. 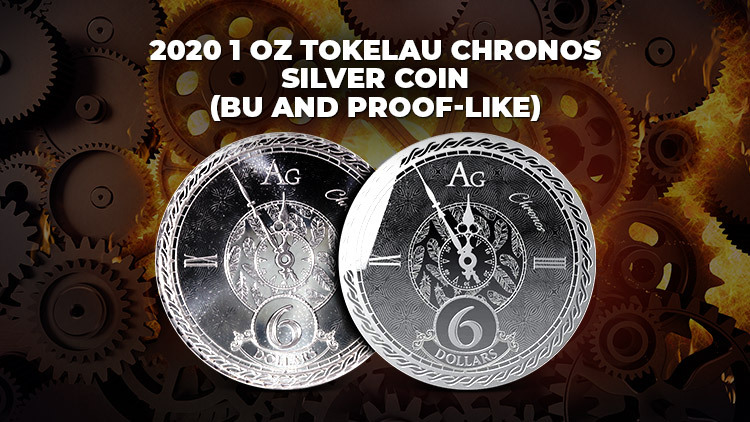 On the obverse side of the 2020 Tokelau Chronos 1 oz Silver Coins is a bust of Queen Elizabeth II. This popular effigy of Her Majesty was designed by Ian Rank-Broadley in 1998 for the Royal Mint of England. The right-profile bust shows the Queen with the Girls of Great Britain and Ireland Tiara, a tiara gifted to her grandmother Mary of Teck upon her marriage to the future King George V. The inscriptions on this face of the coin include “1 oz Fine Silver 999,” “2020,” “IRB,” and “Elizabeth II – Tokelau.” This field of the coin also features a feather arranged in the infinity, or figure-eight, symbol. The date mark of “2020” is split on either side of the bust of Queen Elizabeth II as “20” and “20.”

A feature of the Tokelau Chronos 1 oz Silver Coins that has changed little since its introduction in 2015 is the reverse image of a clock. The clock on this face of the coin is always shown with the minute and hour hands set to five minutes before 12. The background elements in the design field change slightly with each release, as do the hands on the clock. The hands featured on the clock of the 2020 Tokelau Chronos 1 oz Silver Coins are the most ornate yet in the series, with feathers falling through the central background within the block. At the 12-hour mark is “Ag,” while the Roman numerals “III” and “IX” are used for the three- and nine-hour marks, respectively. The six-hour mark features the inscription “6 Dollars.”

The release of the 2020 Tokelau Chronos 1 oz Silver Coins includes an investment-grade BU release and a collectible proof-like option. Both options deliver visual brilliance, with the proof-like coin going above and beyond with a mirrored surface and relief images that are clearer to the eye. The proof-like coins have already sold out at Provident Metals with its 10,000-coin mintage just half that of the 20,000 coins in the BU release, which Provident Metals still has in stock! All coins are individually housed inside of acrylic capsules and come with 1 Troy oz of .999 pure silver.

Background on the Series

As alluded to at the outset, the Tokelau Chronos Silver Series is unlike any other 1 oz silver bullion product out there right now. The Pressburg Mint initially released the reverse design with varying different obverse images in a 1 oz silver round collection from 2015 to 2018. In 2019, the series was enhanced to become a legal tender 1 oz silver coin issue. Queen Elizabeth II’s effigy was added to the obverse of the coins, with face values assigned on behalf of Tokelau in New Zealand dollars (NZD).

Tokelau is the fourth-smallest sovereign state or dependency in the world by population with just 1,499 year-round residents. These nearly 1,500 Tokelauans live one three different tropical coral atolls: Atafu, Nukunonu, and Fakaofo. Though the nation is a dependent territory of New Zealand, it does hold its own elections every three years and its capital rotates between each of the three coral atolls each year. Tokelau may be small, but it has a growing number of silver coins available for investors and collectors that include the Vivat Humanitas, Wildlife, and Terra Series, in addition to these Chronos Series silver coins.

Located in Bratislava, Slovakia, the Pressburg Mint traces its history to 1430. Minting in the capital city once contributed to the production of coins for the Holy Roman Empire and the Kingdom of Hungary, but today it is calling upon its centuries of history in coining some of the finest new silver coins available.

There’s still time to get the 2020 Tokelau Chronos 1 oz Silver Coin BU from Provident Metals. If you have questions about these coins, you can call us at 800-313-3315. We are also available online through our live chat and email address features. You can also keep track of daily updates by following Provident Metals on Facebook and get an in-depth look at new releases in our weekly blog posts.