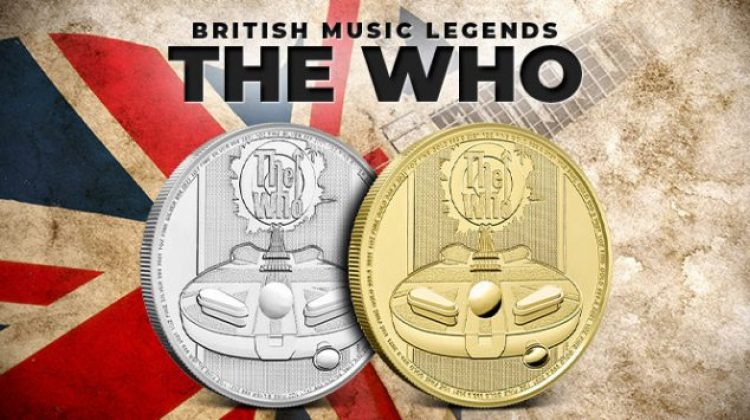 The Royal Mint’s British Music Legends Series offers designs honoring some of the most influential bands to come out of England in the last six decades. From British rock groups to iconic solo performers, the series has so far featured images representative of the likes of Queen, Sir Elton John, and David Bowie. Now, another titan of British music history features on a British coin design in this release with the stars behind the hit 1965 single “My Generation” honored in the fourth release of the British Music Legends Series. The Who design in the collection is currently available to you at Provident Metals while supplies last.

Honoring Auto-Destructive Art on the Reverse

On the reverse side of the 2021 British Music Legends The Who 1 oz Silver Coin and 1 oz Gold Coin, you will find the same design. This face of the coin shows off the auto-destructive art that made The Who famous in their live performances. In this design, an electric guitar comes flying at the viewer, smashing through an amplifier in the process. The guitar has the Union Jack flag on its body while the hole in the amplifier reveals both the iconic “The Who” logo and the group’s mod roundel design. Around the rim of both coins, you will find inscriptions of the date of issue, weight, metal content, and purity. For those latter three details, each coin has its respective information in silver or gold.

The obverse field of all 2021 British Music Legends The Who Coins comes with the popular effigy of Her Majesty, Queen Elizabeth II. The Queen is shown on this site in right-profile relief wearing the George IV State Diadem Crown. This design was created in July 2015 by Jody Clark to serve as the fifth-generation portrait of the Queen on British currency. In the background field behind the Queen’s portrait, you will notice the guilloche design element the Royal Mint uses on all bullion coins. The Queen’s effigy is encircled by inscriptions of “Elizabeth II” and “D.G. Reg. F.D.” on all coins. The 1 oz silver coin has an inscription of “2 Pounds,” while the 1 oz gold coin bears an inscription of “100 Pounds.”

Details of the Silver and Gold Issues

With the release of the fourth design in the British Music Legends Series, the Royal Mint offers the same details and packaging for the silver and gold BU coins. The 1 oz silver coins have .999 silver content with the aforementioned face value and a limited mintage of 25,000 coins. The British Music Legends The Who 1 oz Silver Coin is already sold out at the Royal Mint. These coins come with individual plastic capsules, rolls of 20 coins, or boxes of 100 coins for packaging options.

The 1 oz gold coin boasts .9999 pure gold content and the face value noted above in the obverse description. The 1 oz gold coin has a much lower mintage at just 2,500 coins and will ship inside of an individual protective plastic capsule.

Who are The Who?

The Who are widely regarded as one of the 20th centuries most influential groups. While this is said of a lot of solo performers and groups, it is worthy praise for The Who when you consider the breadth of their impact on other genres. The Who has been directly cited by other performers and groups for inspiring everything from their sound to their live performances across genres that include hard rock, punk rock, and mod bands, with The Who credited with the development of rock opera. The auto-destructive art referenced earlier is a nod to the habit of members of the band destroying guitars and drums on stage during live performances, much to the delight of an uproarious crowd.

Order Your British Music Legends The Who Coins at Provident Metals

Provident Metals’ customer service is available to help answer any questions you might have about these coins. You can call us at 800-313-3315, chat with us live online, or email us directly. Remember, with limited mintages and high demand, these coins are not likely to last long. Our weekly blog posts are available to keep you informed on upcoming and new releases, and our Facebook page offers another good resource for our customers.