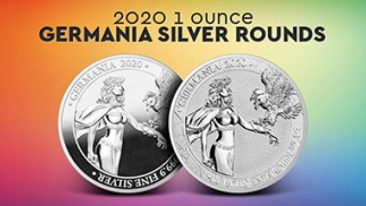 The 2020 release of the Germania Series rounds from the private Germania Mint offers a new depiction of the German female personification on the obverse. After making a big splash in 2019 with a variety of series, the first release available from the Germania Mint in 2020 is a new image of its leading lady, Germania. With a Brilliant Uncirculated and Proof version available for the 1 oz 2020 Germania Round, there’s something for all precious metals enthusiasts through Provident Metals. 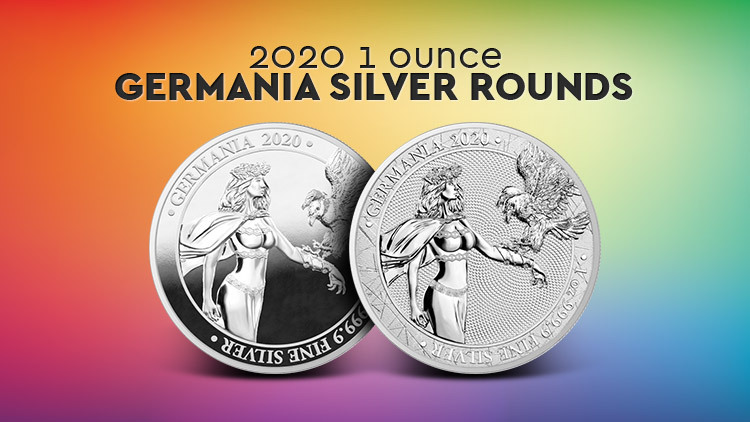 When the Silver Germania Round Series debuted in 2019, the Germania Mint offered a historic depiction of the female personification known as Germania. Her figure was shown in the initial design with a shield bearing the double-headed eagle and a sword in the other hand. For the obverse of the new 1 oz Silver 2020 Germania Round and the 1 oz Silver Proof 2020 Germania Round is a depiction of Germania meeting with the double-headed eagle. Germania stands in left-profile relief. Her cape is swept up in the wind and flaps straight out behind her figure. Meanwhile, her right arm is resting at her side as her left arm reaches out to offer the double-headed eagle a perch on which to land. Her left forearm is covered by a leather shield to protect her arm. An inscription above the design element reads “Germania 2020” and another below reads “1 oz 999.9 Fine Silver.”

The Germania Mint offers a common reverse design for the issues in the Germania Series. While other collections from the mint have distinctive images, the Germania Series has its own in the form of a heraldic eagle. This double-headed eagle is in front-facing relief with one head looking to the past as the other looks to the future. The double-headed eagle is featured on both sides of the round as an important symbol in Germanic mythology. It was associated with Janus, the god of origins and guardian of doorways, bridges, and other passages. The inscriptions on this side of the round include “5 Mark” and “Germania.”

Features of the 2020 Germania Release

The 2020 Germania Series release features a 1 oz Brilliant Uncirculated and 1 oz Proof Silver round available at Provident Metals. The difference in appearance comes down to background visuals and overall appearance. The proof version of the rounds come with frosted design elements and mirrored background fields, while the BU rounds do not have these visuals. However, the BU version of the round does have a beaded, or guilloche-style, background field compared to the clear background of the proofs.

Germania is rooted in the Latin language and was first recorded by the Roman Empire in the 1st century BC. The term was used to refer to the lands in north-central Europe occupied by the Germanic tribes the Romans encountered in battle. The Romans typically used the term as a literary and poetical device linked to regions through patriotic and nationalist feelings similar to the manner in which Britannia referred to Britain, Hibernia to Ireland, and Caledonia to Scotland, as examples. Germania was revived in the Romantic Era in 19th-century Europe, particularly in Germany during the Revolutions of 1848. The figure took on its modern female personification in Imperial Germany from 1871 to 1918 and is still used in some references to the modern nation of Germany.

If you’re interested in the new 2020 Germania Series rounds, you should keep an eye out for other collections from the Germania Mint. These include the Allegories Series and the Oak Series. The former is a broad program that pairs images of Germania with other female personifications, including Britannia, Columbia, and Italia.

1 oz Silver 2020 Germania Rounds are now available from Provident Metals. If you have any questions, our team is here to assist you. Provident Metals’ customer service is available at 800-313-3315, online using our live chat, and via our email address. Please follow our blog for weekly updates and keep up with us on social media for daily updates and weekly contests.