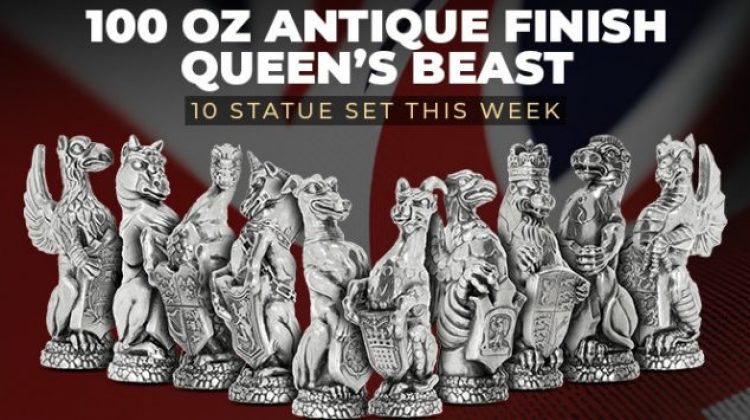 As Queen Elizabeth II approached Westminster Abbey in 1953 to participate in her official coronation ceremony as the next Queen of England, she was greeted just outside by 10 statues depicting the many famous, important heraldic beasts that capture the heritage and lineage of the English crown. Already popular in a bullion coin series from the Royal Mint, there is another option available specifically for collectors who want a piece of British Royal history in their own homes. The specialty silver produced by Hotco includes a wide range of silver statues. Most notable of late is the release of a stunning 100 oz Silver Antique Finish Queen’s Beast 10-Statue Set. Now, you have the opportunity to find out more about the background of these beasts, their significance in British history, and their status in the Queen’s Beast Set in the weekly blog post from Provident Metals.

Hotco recreated each of the beautiful statues from James Woodford in 1952 using sterling silver content, or 92.5% silver per statue. Each individual statue weighs 10 Troy oz, with a total set weight of 100 Troy oz. The statues come with laser-etched markings on the base that identify the weight, purity, and serial number of each specimen. All 10 statues are packaged together inside of a cardboard box for shipping with protective packaging materials around each statue to secure it during delivery. The set comes with a Certificate of Authenticity and an antique polish on each piece. These silver statues are true heirloom-quality pieces and the polish helps to highlight all the little details that make each design special.

The 100 oz Silver Antique Finish Queen’s Beast 10-Statue Set is limited in available to just 100 silver sets in all. Each beast is represented on its own in support of a shield or badge used by monarchs from across the centuries dating as far back as the early Plantagenet kings in the 12th century CE. For more on the design of each set, see below.

Royal Sculptor James Woodford was commissioned to create the original Queen’s Beasts statues in 1952 for use in the Queen’s coronation ceremony. Each one depicts a different, pivotal creature used throughout the history of the Royal Arms and the various houses to rule the throne of England. Included in this set are beasts representing the House of Plantagenet, House of Lancaster, House of York, House of Tudor, House of Stewart, and the House of Hanover. Each one has its own backstory and its own connection to the crown that descends down to the modern and longest-reigning monarch in English history, Queen Elizabeth II. Details on each design include:

Background on the Queen’s Beasts

James Woodford was commissioned by the British Ministry of Works to create the original 10 statues that were present during the official coronation ceremony for Queen Elizabeth II. He modeled the beasts on the King’s Beasts, a set of 10 stone statues erected at Hampton Court Palace during the reign of King Henry VIII. Woodford’s beasts are now on display at the Canadian Museum of History in Quebec.

Own Them All with Provident Metals

Please feel free to contact Provident Metals with any questions about these limited-edition sets. You can call us at 800-313-3315, chat with us live online, or email us directly with your questions. We encourage you to read our weekly blog posts for greater insight on new and upcoming products, and follow us on Facebook for daily and weekly posts, as well as the chance to win gold and silver in our spot price contests.