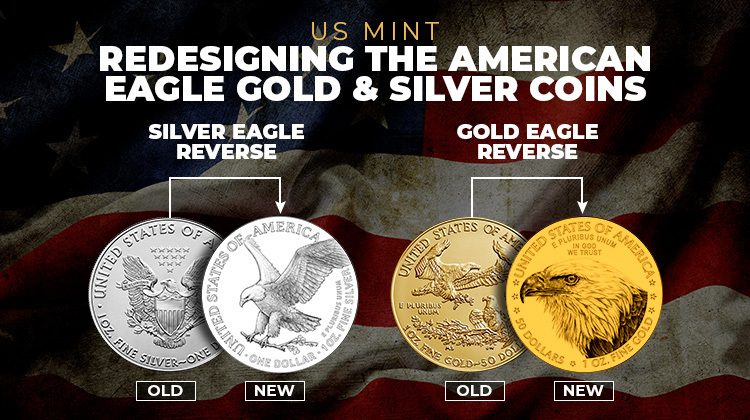 As part of its 35th-anniversary celebration for the two primary American Eagle bullion coins in 2021, the United States Mint is introducing new reverse designs for the first time in the history of either coin. After an exhaustive artistic competition that saw 34-plus possible designs whittled down to one for each coin, the US Mint has chosen new reverse designs for each. Below, you can learn all about the new American bald eagle designs soon to grace the coins and even learn a little about Artistic Infusion Program artists Emily Damstra and Jennie Norris, the artists behind the new designs.

In the new reverse design of the American Eagle Silver Coin, the US Mint features the design of a hardworking bald eagle. The new design element captures the bald eagle hard at work building up its nest. The eagle is shown with its wings and legs at full stretch. The wings are slowing the bird’s descent toward its nest, while its talons are clutching a long olive branch that is soon to be added to its nest. The American bald eagle is famed for building the largest tree nest of any North American bird and one of the largest of any bird species in the world. The inscriptions on the new reverse field mostly surround the outer rim and include “United States of America” and “One Dollar – 1 oz. Fine Silver.” Just inside the design rim above the metal content inscription is the inscription of “E Pluribus Unum.”

Each of the new designs comes from a member of the Artistic Infusion Program at the United States Mint. The American Eagle Silver design comes from Emily Damstra, an extremely talented artist with an M.F.A. in science illustration and a proven reputation for coin design with both the Royal Canadian Mint and the United States Mint. A resident of the Great Lakes region, Ms. Damstra’s passion for the outdoors comes through in a lot of her artwork. She specializes in zoological, botanical, anthropological, ecological, and paleontological designs in much of her work. When it comes to coin designs focused on North America’s wildlife and birds of prey, in particular, she has no shortage of experience.

Ms. Damstra famously contributed to two of the Royal Canadian Mint’s most successful silver collections from the past decade. She designed the final two reverse images in the Canadian Wildlife Series, as well as all four birds featured in the Birds of Prey Series. Her credits at the United States Mint include eight designs as of 2017, with the most visible being the 2020 Tallgrass Prairie National Preserve and 2019 Frank Church River of No Return Wilderness Area designs in the America the Beautiful Series.

For the reverse of the American Eagle Gold Coin, investors and collectors will find the image of a vigilant American bald eagle. The design offers one of the closest looks at the American bald eagle on any coin from the US Mint. The bird’s head is shown in left-profile relief in a realistic design that captures the details of its plumage, the steely gaze of its keen eyesight, and the powerful, hooked beak it uses to rip into its prey with ease. As with the American Eagle Silver Coin, you will find the same inscriptions on this face of the American Eagle Gold Coin that are common to the reverse, but with a new arrangement to accommodate the new design element. Inscriptions include “United States of America” and “50 Dollars – 1 oz. Find Gold” along the outer rim of the design field. Below the inscription of the nation of issue and above the head of the eagle, the inscriptions of “E Pluribus Unum” and “In God We Trust” are stacked together. The fractional-ounce coins will have the appropriate face value and weight marked in their inscriptions.

Another Artistic Infusion Program artist, Jennie Norris currently works as a graphic designer at the University of Arizona in Tucson. A graphic designer, illustrator, and fine artist by trade, Ms. Norris is new to the AIP at the US Mint and has no listed designs to her credit as yet. However, she was able to call on her experience as a volunteer raptor handler and a lover of the great outdoors in her creation of the new American Eagle Gold Coin reverse design element. Her artistic background includes the development and production of designs for stationery and gifts for brands such as Crayola, Hasbro, Sea World, and Hershey, as well as products placed in stores like Michael’s, Target, and Costco. She is a passionate supporter of wildlife conservation, rescue, rehabilitation, and sanctuary.

The United States Mint is changing the designs on the reverse of these two iconic programs in 2021 to coincide with the 35th anniversary of the American Eagle Silver and Gold Coins. Under US law, the US Mint and Treasury would need special authorization to make changes to national coinage before the 25-year mark. As both programs are well beyond that point now, it was decided to make an adjustment to move the American Eagle Silver and Gold Coins to a fresh position going forward into the 21st century in the 2020s.

You will find these new designs available first on the Brilliant Uncirculated release of each coin. The US Mint expects to have the new reverse designs in production and distributed to authorized dealers as early as July 2021. Until that point in time, the early 2021 releases will feature the existing design combinations. Proof and Burnished versions of the American Eagles will receive the new reverse designs later in 2021.

Keep an Eye Out for the New Designs Later this Year

As soon as the US Mint has the new designs ready for buyers, Provident Metals will have both coins available to our customers. In the meantime, you can still invest in the 2021 American Eagles with the existing, historic design combinations one last time. Remember to follow us on Facebook and read our weekly blog posts to stay up-to-date on all things precious metals.