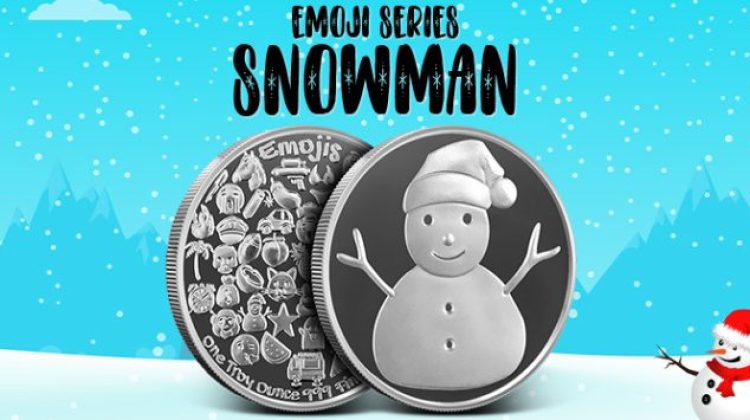 For the obverse design of the new 1 oz Silver Emoji Snowman Round, the field includes a depiction of the snowman as created as an emoji. Foregoing the traditional three-stack design, this snowman has a wide, round base with a smaller, circular head. The body of the snowman had two coal buttons and two twig arms, while the head has two coal eyes, a smile, and a small button nose. The snowman is also wearing a winter cap.

In the reverse design of Silver Emoji Snowman Rounds, you will find a common design element that is set to appear on the reverse of all of the rounds in the collection. Here, a flood of emojis fills the field with all of your favorites appearing. Everything is here, from the rocket ship, train, airplane, and car to aliens, ghosts, chimps, skulls, and the snowman. Inscriptions on this side include EMOJIS, ONE TROY OUNCE, and 999 FINE SILVER.

Once again, you’ll be able to purchase this round individually or in bulk, with single rounds in flips and multiples of 20 in plastic tubes. For the new Snowman Round, however, we’ve got something special available to collectors as well. The new 1 oz Silver Emoji Snowman Round in Christmas Card is available as a special option for those looking to gift these silver rounds during the holidays.

Just in time for Christmas, this option offers an individual 1 oz Silver Emoji Snowman Round sealed in plastic and enclosed in a Christmas-themed card. This card has an image of Santa dashing across the front lugging a large toy bag over his shoulder. This toy bag holds the Snowman Round.

Background on Snowmen and Emojis

A simple way to enjoy a snowy day, snowmen can be easily and quickly made by rolling freshly-fallen snow into balls and stacking them. It is impossible to know when the first snowman was ever made, but we do know that 14th-century Europeans were familiar with the winter activity. The margins of a book held in a library in The Hague, Netherlands, contains a doodle of snowman and this book was published in the early 14th century.

Give the Gift of Snowman Emojis Courtesy of Provident Metals

While the Emoji Smiley Round, is still in stock, now is the time to keep your collection going with the purchase of the new Emoji Snowman Round. Please contact Provident Metals with your questions by calling us at 800-313-3315, chatting with us live online, or emailing us directly. You can also follow us on social media and read our blog for more information on new and upcoming releases.