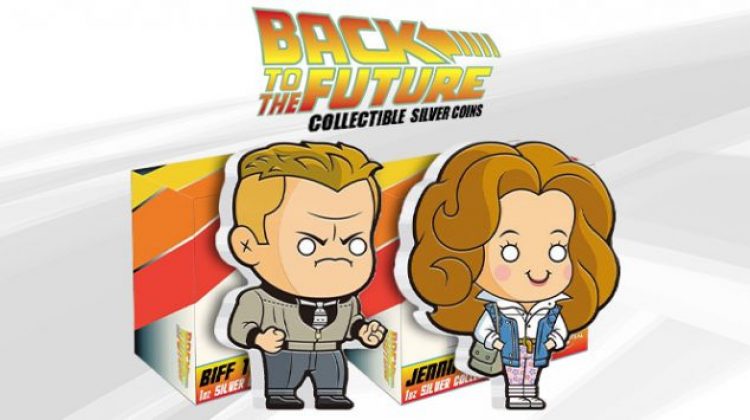 In 1985, Back to the Future hit theaters and captivated audiences with its fantastic tale of time travel and the impacts it can have on life in the present. The first film in the series was so popular that two subsequent films were eventually released in 1989 and 1990. As part of the 35th anniversary for the series, the characters from Back to the Future were reinvented by the New Zealand Mint on silver coins for sale with chibi artwork capturing the main characters in new visuals. Now is your chance to learn more about these new Back to the Future Chibi Silver Coins from Provident Metals.

The reverse field of 2021 Niue Chibi Back to the Future Biff Tannen Shaped 1 oz Silver Coins depicts a chibi figure of Biff Tannen. Biff is the antagonist throughout the films. In the first film, we’re introduced to a middle-aged Biff who bosses around Marty McFly’s father, George. When Marty goes back to 1955, he sees where this conflict between his father and Biff started. Throughout the franchise, we see an older Biff in the future and even Biff’s distant relative Bufford Tannen in the Wild West. This colorized figure has an oversized head with a smaller, stubbier body and arms. The entire coin is shaped like the figure of Biff depicted on this side.

For the reverse design of 2021 Niue Chibi Back to the Future Jennifer Parker Shaped 1 oz Silver Coins, the mint offers a chibi depiction of Marty McFly’s girlfriend Jennifer. In this colorized, chibi design, Jennifer is shown with a smile on her face and puffed-up blonde hair. Jennifer features in all three films in the series, with high-school-aged Jennifer the most common character. In the second film of the series, Jennifer actually goes into the future with Marty and Doc to try and save Jennifer and Marty’s son from making a big mistake. Like the Biff Tannen coin, the Jennifer Parker coin is shaped like her figure as shown here.

On the obverse of the 2021 Niue Chibi Back to the Future Shaped Silver Coins is an effigy of Queen Elizabeth II. The Queen is shown here in right-profile relief in the 1998 design from Ian Rank-Broadley. This effigy shows the Queen wearing the Girls of Great Britain and Ireland Tiara on her head. The field includes inscriptions of ELIZABETH II, NIUE 2021, 2 DOLLARS, 1 OZ 999 FINE SILVER, and copyright and trademark engravings.

The coins in the Niue Chibi Back to the Future Collection are available with 1 Troy oz of .999 pure silver and a face value of 2 Dollars. The coins are packaged individually inside presentation boxes that include themed shippers with the same chibi artwork of the characters found on the reverse of the coins. The chibi coins are part of a popular new design concept from the New Zealand Mint. Chibi is a Japanese slang term for caricature artwork that creates figures with stubby, short figures, and oversized heads.

About Back to the Future

The Back to the Future film trilogy launched in 1985 with the first film. In the first film, Michael J. Fox played the character of Marty McFly. He was sent back to 1955 in a time machine that had been created by Christopher Lloyd’s character, Doc Brown, who had just been killed by terrorists in 1985. Fox was not initially available to play the lead role, but after early test screenings were unsuccessful, changes were made to get Fox onboard once he was available following a different project. The film was released on July 3, 1985, and became the highest-grossing film in 1985 with a worldwide box office of $381.1 million.

Now’s the time to start your Chibi Collection. Provident Metals has the first of its chibi-style coins available from the Back to the Future Series. Please contact us with any questions at 800-313-3315, chat with us live online, or simply send us an email with your inquiries. You can also follow us on Facebook and read our weekly blog posts for more information.