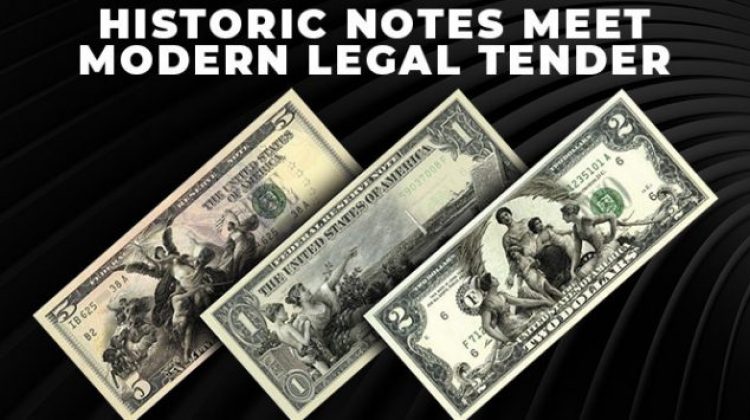 There’s a new lineup of collectible items available to monetary enthusiasts at Provident Metals, and we can assure you this new lineup is unlike anything else. A growing trend among private mints is the enhancement of modern Federal Reserve Notes from the US Treasury and the Bureau of Engraving & Printing. Though modern notes from the US government are a respected, stable form of fiat currency, the design of modern notes leaves something to be desired. Historically, US paper notes had designs that were reminiscent of small works of art that average people could carry in pockets and wallets. Provident Metals offers a rundown of these new legal tenders in our weekly blog.

A slew of historic designs are being revived on modern Federal Reserve Notes to create affordable, available collectible pieces for monetary enthusiasts. From the 1890s to the 1910s, the United States went through an exhaustive program to revamp all of its currency designs, with a particular focus on developing paper note designs that were akin to works of art. Featured originally on US Silver Certificates and the United States Note Series, these beautiful designs are once again available to collectors with high-definition graphics and brilliant colorization:

In addition to replicating historic US paper note designs, private mints are using unique processes to create commemorative issues featuring new visuals with high-definition, colorized graphics on the face of Federal Reserve Notes. As an early example of some of the new products available, you will find:

Which Notes Get Enhanced?

The enhancement process that takes place on the notes adds to the value of the note beyond its assigned face value from Congress. However, in the interest of not creating items that are far more valuable as circulation notes than collectible pieces, private mints focus on the three smallest denominations of US Federal Reserve Notes when enhancing the bills with new design graphics. This includes the $1, $2, and $5 bills from the Bureau of Printing & Engraving. While the obverse busts of former presidents are often covered by the graphics, the reverse sides maintain the original designs to include:

Background on US Paper Money

The first major form of US paper money issued was the Demand Note. While the Continental Congress had previously issued paper money during the American Revolution, it wasn’t until the Civil War that paper money became more commonplace. The Demand Note was only issued in 1861 and 1862 as a means of covering the costs the federal government incurred during the Civil War. In 1862, another form of US paper money made its debut that represented a more long-term form of legal tender. Known as the United States Note, the designs from this series and the Silver Certificate Series are prominently featured on these new, enhanced Federal Reserve Notes. A bit more background information:

Packaging for Other Legal Tender Notes

The other legal tender notes now available come with beautiful display folios. The bi-fold presentation folios house the enhanced note on the right side with a Certificate of Authenticity on the left side.

Provident Metals is proud to expand its offerings to now attract more monetary enthusiasts and collectors with these new legal tender notes. If you have any questions, please feel free to ask. You can call us at 800-313-3315, chat with us live online, or email us directly. Don’t forget to read our weekly blog posts and follow us on Facebook for more updates and weekly information.