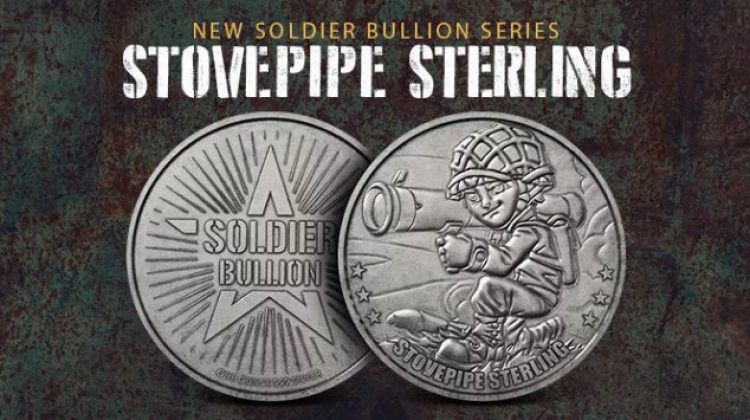 One of the hottest silver bullion design collections of recent years was the Silver Soldiers Series from Hotco. These impressive sterling silver statues captured images reminiscent of the Green Army Men and other tin soldiers that generations of American kids grew up playing with. Those toys were used by children of all ages to reenact battles and explore their own imaginations. When the Silver Soldiers Series of statues were released, those who have outgrown the toys found a new way to connect with their youth and showcase their appreciation of history. Now, the soldiers you fell in love with in the Silver Soldiers Series are returning in a brand-new collection of silver rounds. The first release of the new Soldier Bullion round series is now available at Provident Metals and offers a familiar face captured in a new light.

The silver rounds of the new Soldier Bullion collection start with the unique reverse design found on the 1 oz Silver Soldier Bullion Series Stovepipe Sterling Round. One of the first designs available from the Silver Soldiers statue collection, Sterling makes a return in the Soldier Bullion Series in a more colorful, cartoon-like figure. With a smirk on his face, Sterling takes a knee and raises his bazooka up onto his shoulder. The burst of smoke out the back signals that Sterling has already sent a round toward its intended target. Never fear though, with another round by his feet, Sterling is ready for more action. The inscriptions on this face of the round include “Stovepipe Sterling” at the bottom flanked by three stars on either side.

The designs and silver rounds available in the new Soldier Bullion collection are perfect for the investor or collector. Each 1 Troy oz silver round contains .999 pure silver content and comes with a reeded edge. The rounds can be purchased individually or in multiples up to 19 with a protective plastic flip. Multiples of 20 will arrive with an acrylic tube. You can expect to see some of your favorite soldiers from the statue series making an appearance in this exciting new silver round collection.

Who is Stovepipe Sterling?

Each of the Silver Soldiers in this collection and its sister collections have been given playful names that offer a twist on the individual’s weapon or role. For example, Sterling is the given name for the man in the unit assigned to work the bazooka, a shoulder-fired weapon that World War II-era troops would often refer to as the stovepipe for its similarity to a wood-burning stove’s exhaust pipe. Other examples include Medic Martinez, the unit’s medic, and Arty “Red Leg,” the artilleryman responsible for keeping the heavy rounds raining downrange.

In the thick of the fight, it is Sterling’s job to keep his unit safe. Infantry units in World War II included soldiers assigned to various roles, from machine gunners providing heavy, suppressive fire against the enemy to “Eyes On” Earl, the team’s radioman and spotter. Sterling was assigned the bazooka, more formally known as the M1 variant. This shoulder-fired, recoilless weapon enabled his squad to punch back at enemy tanks, armored vehicles, machine gun nests, and fortified bunkers to ensure the survival of the unit in the heat of battle.

History of the Bazooka

The M1 variant of the US-made rocket launcher was conceived in the latter stages of World War I and hit the battlefield with United States Army units in Europe during World War II. The United States Marine Corps would use the M1 as well, mostly in the Pacific Theater against the bunkers and tunnel complexes of the Japanese. The M1 has been modified and enhanced countless times over the years, serving US Army soldiers and United States Marines through the Korean and Vietnam Wars through to modern conflicts.

The concept behind the original M1 was to increase the survivability of infantry in the field by providing a counterbalance to enemy armored units. The recoilless weapons could be fired by one individual while slung over the shoulder. Propelled downrange by solid-propellants, the rounds from an M1 were often high-explosive anti-tank rounds designed to puncture a tank’s shell and disable the crew. The rounds also proved effective at neutralizing bunkers and machine-gun nests beyond the range of a soldier or Marines’ throwing ability with a grenade.

Start a New Collection with Soldier Bullion from Provident Metals

The statues of the Silver Soldiers Series didn’t last long, and you can expect the same response to the rounds of the Soldier Bullion Series. If you have any questions, please contact Provident Metals. Our team is available at 800-313-3315, online using our live chat, and via our email address. Don’t forget that you can follow us on Facebook and read our weekly blog posts for more information about all of our exciting additions.