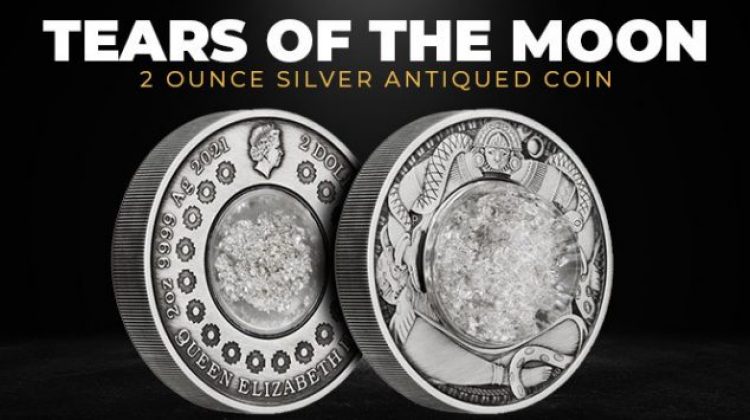 Mama Quilla is one of the most important deities from Incan mythology and her figure is believed to be the source of some, or all, of the silver on Earth. In a new antique silver coin release from the Perth Mint, the Tears of the Moon are captured in a domed, clear Perspex case within the physical design of the coins. This stunning new release celebrating Incan mythology offers limited mintages and impressive packaging. Now’s your chance to learn all about the new Antique Tears of the Moon Silver Coin release for Tuvalu.

In the obverse field of the 2021 Antique Tuvalu Tears of the Moon 2 oz Silver Coin, you will find an effigy of Queen Elizabeth II. Her Majesty’s effigy has featured on British and Commonwealth coins throughout her long reign as the Queen of England. The design found at the top of the design rim on this surface of the coin is the fourth-generation design from the Royal Mint of England. It was created in 1998 by Ian Rank-Broadley and showcases the Queen in right-profile relief wearing the Girls of Great Britain and Ireland Tiara. Around the clear Perspex field are several Incan crosses known as chakans. The inscriptions on this face include “2 Dollars,” “Tuvalu,” “Queen Elizabeth II,” and “2 oz 9999 Ag 2021.”

For the reverse design of the 2021 Antique Tuvalu Tears of the Moon Silver Coins, the Perth Mint offers two distinctive elements. Around the edge of the design field is a depiction of the Incan goddess known as Mama Quilla. She is shown here struggling with a mountain lion and a serpent. These visuals dance around the domed Perspex field at the center. Within this Perspex dome, you will notice particles of silver floating in a pure mineral oil solution.

As impressive as the coin itself is, the Perth Mint went above and beyond in developing the packaging for these unique specimens. Each coin comes with a black-and-blue box for shipping. Inside of the box is a beautiful presentation case shaped like the head of Mama Quilla, the ancient Incan goddess. The presentation case is made from molded plastic and varnished to showcase a silver appearance. As you open the mouth of the statuesque figure, you reveal the drawer within which the coin is housed. The Perth Mint has limited the mintage on these coins to just 2,500 silver coins and each one comes with a Certificate of Authenticity.

Mama Quilla is the goddess of the Moon in Incan mythology and religion. She is believed to be the older sister and wife of Inti, the Incan god of the Sun. She is also said to be the mother of the two founders of the Incan Empire and culture, Manco Capac and Mama Uqllu. Mama Quilla stood with Inti and Illapu, the god of thunder, as one of the three most important deities to the Incan people. Coastal communities within the Incan Empire often viewed Mama Quilla as the most important deity, likely due to the impact of the Moon on tidal changes of the oceans.

Catch Your Tears of the Moon Before the Coins Sell Out

Given the low mintage figures and stunningly unique appeal of these coins, you can expect these items to sell out quickly. If you have any questions, please feel free to contact Provident Metals. Our team is available to assist you at 800-313-3315, online using our live chat, and through our email address. You can also follow us on Facebook and read our weekly blog posts for more information on new and upcoming releases.