The 2018 Winter Olympics in Pyeongchang are set to take place from February 9th to 25th. For two whole weeks, skiing, skating, and a host of other sports will heat up the season as families around the world gather to watch top athletes perform on TV. Participating countries will send their best athletes to compete in the 15 different events that make up the winter games. Years of preparation and training is channeled into this global competition.

A Short History of Olympic Medals

The goal of every competitive athlete is to literally bring home the gold—with the Olympic gold medal representing the ultimate athletic achievement. Olympic medals were first introduced in 1896, when the modern games were rebirthed in Athens. The Olympics began in ancient Greece in 776 BC and ran through 393 AD, when they took a long hiatus until this rebirth.

Though valuable in many ways, Olympic medals are not made of pure metals like you would find in gold or silver bullion. Rather, they contain a blend of metals that often changes with each new set of games.

The host city’s organizing committee is responsible for deciding upon the medals’ composition and design. Sourcing metals and economic factors in each country means that content can vary greatly with each new set of games. However, there are a few standards that must be followed. Gold and silver medals must be made of at least 92.5% silver, gold medals must be plated with at least six grams of gold, and all Olympic medals must measure at least 3 mm thick and 60 mm in diameter.

The 2018 Winter Olympics medals, by South Korean designer Lee Suk-woo, were inspired by the texture of tree trunks. Diagonal lines stretch across the face of the medal, forming consonants around the edge. The consonants come from Hangeul—the Korean alphabet—and come together to spell “Olympic Winter Games PyeongChang 2018.” The medal’s obverse features the Olympic ring logo, while the reverse features the PyeongChang 2018 emblem and the discipline for which the medal will be awarded.

The teal and pink ribbon attached to the medal is made of gapsa, a traditional South Korean fabric. This fabric is embroidered with Hangeul patterns and other designs. 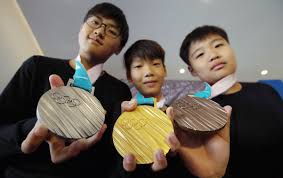 This means that, despite all the gold medals to be awarded, only about 55 ounces of gold was used to create them. Meanwhile, about 9,659 ounces of silver was needed for the production of both the gold and silver medals.

Though Olympic medals are made from precious metals—albeit very little gold—the notoriety of winning a medal far outweighs its financial value. Competing in the Olympics is the pinnacle of an athlete’s career, and winning a gold medal is symbolic of being the best of the best. Determining the value of such a medal is no easy task, and will vary greatly among different crowds.

Someone solely interested in how much the precious metal content is worth may value an Olympic medal by the price of the gold and silver within each medal. According to this year’s composition specs, that breaks down to about $608 for gold medals and $348 for silver medals.

Competitive athletes might view the value of the medal as a culmination of everything they’ve invested for the chance to win one. The cost of training and equipment can easily top tens or hundreds of thousands of dollars per year. Additionally, athletes may have to forgo formal education and/or prime years of work experience in order to compete in the Olympics, which could take a toll on future earnings. Even so, this certainly doesn’t guarantee a win; it doesn’t even guarantee athletes a spot in the Olympic games. Winning a medal is representative of years of hard work and sacrifice, which equates to a much higher price tag than simple melt value.

For Olympic winners, a gold medal might lead to lucrative endorsement/sponsorship deals and more opportunities to cash in on the win. This isn’t the case for all gold medal winners, but many have found that the medal kicked off an avalanche of financial wins. For those fortunate athletes, the medal holds immense value.

Olympic medals may also value higher to collectors. It’s common to find Olympic medals up for auction, so we have data to track their collector value. Gold medals often go for $10,000 in auction, with rarer or older medals selling for higher. Medals belonging to particularly well-known athletes can sell for exorbitant amounts. For example, one of Jesse Owens’ gold medals won in 1936 sold for $1.47 million in 2013.

Regardless of the metal content, there’s no question that Olympic medals are valuable treasures the represent one of the world’s longest-running competitions. Will you be tuning into the Winter Olympics? Which event are you looking forward to most?