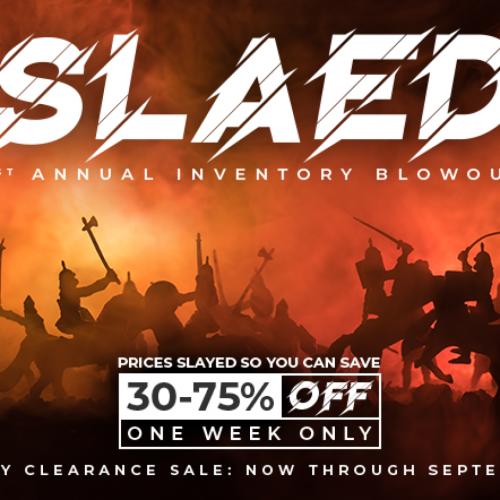 You may have heard us talking about our first annual SLAED event a lot lately.

In order to understand where we came up with the idea, we must first take you back in time – all the way back to the summer of 1954 –  to a legendary moment in retailer history.

Jerry Gart, owner of sports retailer Gart Sports (later Sports Authority), was desperate to come up with a way to offload the previous winter season’s old merchandise before truckloads of new styles started arriving in the fall. Gart scribbled the idea for an inventory closeout sale called SNIAGRAB (bargains spelled backwards) on the back of a napkin at a diner in Seattle – and a ski merchandise revolution was born. 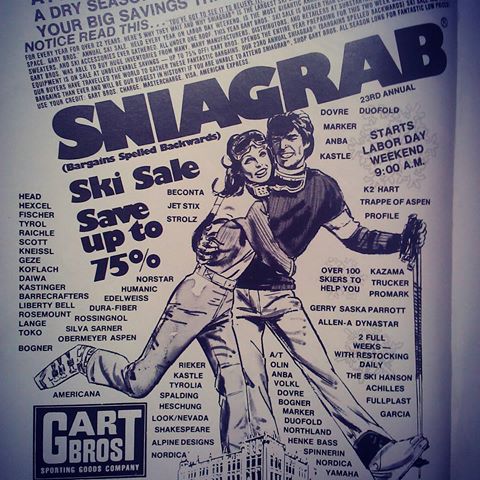 Before long, SNIAGRAB grew into a highly-anticipated annual Labor Day event that offered discounts up to 75% off previous-season winter gear to make way for the upcoming season’s new styles. Over the course of its 61-year reign, SNIAGRAB became so legendary, especially at its flagship store in Denver, that it eclipsed most retailers’ Black Friday sales! 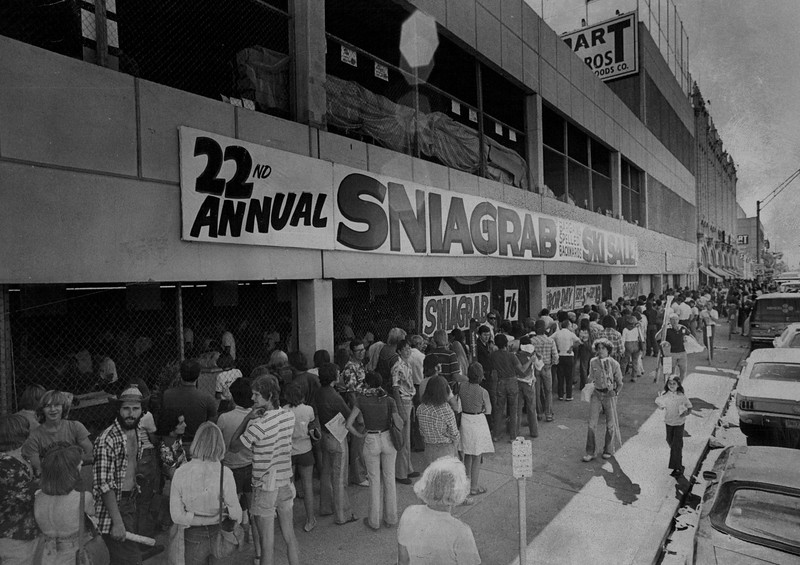 An estimated 30,000 people attended the Denver store’s event on Labor Day weekend alone. Throngs of crowds (many of whom camped out for days in advance) forced the city to shut down several streets surrounding the store. Live music, food, face painting for kids, and ski and snowboard stars filled the streets to entertain guests while they waited in a line that typically stretched over a mile long. In fact, the event became so big that the store had to build special 2nd-floor reinforcements to hold the weight of the crowds!

Soon, SNIAGRAB sales spread to Gart Sports stores in every major city in the country, turning it into the largest winter gear sale event in the United States. And the retail ski business, a traditionally elitist and specialty-oriented industry, scrambled to catch up to Gart’s mass market appeal.

So What Does This Have to Do with Me?

True, but here in the metals industry we have our own season of sorts: NEW RELEASE SEASON. And it’s right around the corner! From now until the end of the year, there will be a steady stream of 2019 releases emerging from both private and sovereign mints. So, like Gart’s Sports before a new ski season, we too need to MAKE ROOM for New Release Season!

Provident Metals doesn’t have a storefront (please, no camping out in front of our office!). But hey, it’s 2018 – which means that we can bring the DEALS to you — through your email.
So get ready. Because FOR ONE WEEK ONLY, we’ll be hosting our very own version of SNIAGRAB, which we’ve affectionately dubbed SLAED (get it?). From now through September 30th, we’re opening up our vaults and SLAYING prices up to 75% off on our current inventory.

How do I get in on this deal?

It’s easy. This is an exclusive event just for our email subscribers, so if you want to get in on the deals, all you have to to is sign up here.  If you’re already a subscriber, then be sure to check your email every day around 11 a.m. Central where we’ll highlight specific bullion and throw in some extra goodies for fun!

We hope to not only make room for new releases, but continue to be your trusted resource in the bullion industry by providing high-quality precious metals at rock-bottom prices. Remember, this is an inventory blowout – so we are clearing out what’s left! Most of the products you see during SLAED are priced at or below wholesale pricing, and inventory levels will vary. So if you see something you like, grab it while you can!