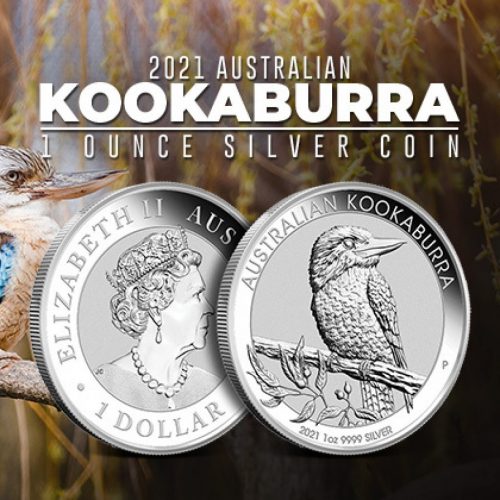 A hallmark of the Perth Mint and its Australian Kookaburra Series is the use of new reverse designs for each date mark. The 2021 Australian Kookaburra 1 oz Silver Coin comes with a new design from Aleysha Howarth, an experienced designer who has worked with the Perth Mint on countless coin designs. The image of the kookaburra shown here depicts the bird at rest as it sits on the branch of a gum tree while small seed pods from another branch are visible below. Generally speaking, gum tree is a term for smooth-barked trees. On the Australian continent, this applies to the Eucalyptus tree, a genus of a tree with more than 700 known species of flowering trees, shrubs, and other plants. Inscriptions on this face of the coin include “Australian Kookaburra,” “2021 1 oz 9999 Silver,” and the “P” mintmark of the Perth Mint.

The Queen’s Effigy on the Obverse

For the obverse design of the Australian Kookaburra Silver Coin, the Perth Mint uses the latest portrait of Queen Elizabeth II. As a Commonwealth nation of the United Kingdom, Australia honors Elizabeth II with the dual-title as Queen of Australia alongside her title as Queen of England. This right-profile portrait is the sixth-generation design to feature on Australian coins and was created in 2015 by Jody Clark. With her shoulders and neckline visible in the full portrait, this design marks a first since 1966 in terms of the visual elements in the Queen’s portrait of Australian silver coins. The Queen wears the George IV State Diadem Crown in this design. The crown was commissioned by King George IV in 1820 during the first year of his reign. It was created by the crown jewelers at Rundle and Bridge with 1,333 diamonds and a massive 4 karat yellow diamond. Inscriptions on this side of the coin read “Elizabeth II,” “Australia,” and “1 Dollar.”

Release Details for the 2021 Australian Kookaburra

The 2021 Australian Kookaburra is the 32nd release of the coveted series, with the 32nd new design of the collection. The Australian Kookaburra Silver Coins are available in 2021 in 1 oz silver, 10 oz silver, and 1 Kilo silver. Each one of the coins has .9999 pure silver content with a face value issued in Australian dollars (AUD). The 1 oz coin is the only one with a mintage cap, one that is set at 500,000 silver coins. The 10 oz and 1 Kilo coins have an unlimited mintage, meaning only that the Perth Mint will produce the coins through the point in 2022 when the Perth Mint will release the next design in the series. At that point, no more 2021 coin designs will be issued.

Background on the Kookaburra Series

In 1990, the Perth Mint released the Australian Kookaburra for the first time. The landmark series represented the start of a trend that would see native Australian animal species feature in new reliefs on the coins each year. Today, the 1 oz, 10 oz, and 1 Kilo silver coins are the primary options available to investors in this series. When the series debuted in 1990, only the 1 oz silver coin was available. This continued into 1991 until more coins were finally introduced in 1992. The 1992 release saw the debut of 2 oz, 10 oz, and 1 Kilo coins. From 1992 to 2009, these weights continued to feature in the series. In 2010, the Perth Mint discontinued the release of the 2 oz silver coin, leaving only the three modern weights currently available in the series.

Investing in the Australian Kookaburra at Provident Metals

Please feel free to reach out to Provident Metals if you have any questions about the latest release of the Australian Kookaburra Silver Coins. Our customer service team is available to field your questions on the phone at 800-313-3315, online using our live chat, and via our email address. You are encouraged to follow us on Facebook for daily and weekly posts, as well as a chance to win gold and silver in our spot price contests. Don’t forget that we post new blog posts each week with detailed insight on new and upcoming releases.