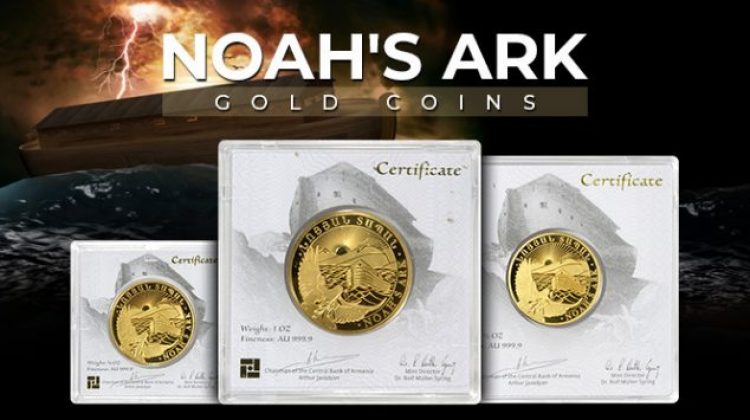 The obverse field of the new 2020 Armenian Noah’s Ark 1 oz Gold Coin and its counterparts features the national coat of arms for the Republic of Armenia. The modern Republic of Armenia was formed in September 1991 as the Soviet Union was dissolving. The nation declared its independence and adopted a new coat of arms less than a year later in April 1992. The modern coat of arms consists of various elements and represents both the historic Kingdom of Armenia, the modern nation, and its former Soviet connections.

Tracing its roots all the way back to the founding of the Kingdom of Armenia in the 1st century BCE, the modern seal is supported on either side by a heraldic eagle and a heraldic lion. The eagle supports the shield on the left, with the lion supporting the shield on the right. The quartered shield features additional lions and eagles. In the first quadrant, you will find a passant lion with a cross on its back, while the fourth quadrant has a passant guardant lion with a lion on its back as well. The second quadrant features a double-headed eagle, with a roundel flanked by eagles in the third quadrant.

As a nod to its Soviet Era-history, the Republic of Armenia coat of arms has an additional seal at the center. This smaller shield depicts Mount Ararat with Noah’s ark resting at its summit, linking the nation to its deep ties with the story from the Book of Genesis. When Armenia was a Soviet Republic, its coat of arms had a large depiction of Mount Ararat in the center.

For the reverse design of 2020 Armenian Noah’s Ark Gold Coins, Geiger Edelmetalle uses a design from Eduard Kurghinyan. The image captures the scenery described in the Book of Genesis. God asked Noah to build an ark to preserve the lives of his family members and two of every animal on Earth. God then sent 40 days and 40 nights of rains to flood the Earth and cleanse humanity of the sins of mankind. After the 40 days and nights ended, the rain stopped and the sun came out. As it did, Noah sent out a dove to seek out dry land. In this design element, you can see the sun rising over Mount Ararat in the distant background as the dove returns to the ark with an olive branch in its beak, symbolizing the reality that dry land exists once again on Earth.

While the Armenian Noah’s Ark Silver Coin Series offers investors a total of seven bullion coins to choose from, the Armenian Noah’s Ark Gold Coin Series provides four options to investors that are unique among its competitors. These include a 1 oz, 1/2 oz, 1/4 oz, and 1 Gram gold coin with .9999 pure content per coin. The face values and mintages of the coins in this series include:

The unique selection of weights available in this series isn’t the only standout factor for this new series of gold coins. Unlike the silver coins in the collection, the gold coins are available inside of individual, secure blister cards. The packaging includes a capsule at the center with a Certificate of Authenticity card inside. The card includes authenticating details such as weight, purity, metal content, and a unique serial number.

The Noah’s Ark theme for the official Armenian bullion coin series is not a random selection. Instead, the design was chosen for the coins because of the Republic of Armenia’s deep connection to Christianity and the biblical tale of Noah’s Ark. Organized kingdoms existed in what is now Armenia as far back as the 6th century BC. The former Kingdom of Armenia reached the height of its power and land in the 1st century BC under the leadership of Tigranes the Great. In the late 3rd or early 4th century, it became the first state in the world to adopt Christianity as its official, state religion.

As it relates to the specific tale of Noah’s ark from the Book of Genesis, Armenia was previously home to Mount Ararat. The mountain peak is the spot where the Bible says Noah’s ark came to rest once the floodwaters subsided and dry land once again revealed itself. It wasn’t until the post-World War I era when Armenia lost Mount Ararat. The border between Armenia and the Ottoman Empire/Turkey once ran directly over the mountain, leaving some of the mountain in its historic homeland. However, international agreements after World War I and the dissolution of the Ottoman Empire resulted in boundaries being redrawn and the whole of Mount Ararat moving into Turkey.

Geiger Edelmetalle is one of a handful of private mints around the globe issuing legal tender coinage on behalf of smaller nations. The private German mint issues these coins on behalf of the Central Bank of Armenia, with the signature of the Chairman of the Central Bank of Armenia on the Certificate of Authenticity card included with these Armenian Noah’s Ark Gold Coins. Geiger Edelmetalle was founded in 1218 near Leipzig, Germany. The region is the hub of silver mining in Germany and the mint is the oldest silver trading company in the nation. Today, Geiger Edelmetalle operates a state-of-the-art private minting facility near its corporate headquarters, the 17th-century Baroque-style caste known as Schloss Guldengossa.

Provident Metals now has the 2020 Armenian Noah’s Ark Gold Coins available for investors. Our customer service team is available to assist you with any questions at 800-313-3315. You can also reach out to us online using our live chat and email address features. Please remember to follow us on Facebook and keep up with our weekly blog posts to stay in the know on upcoming coin releases.