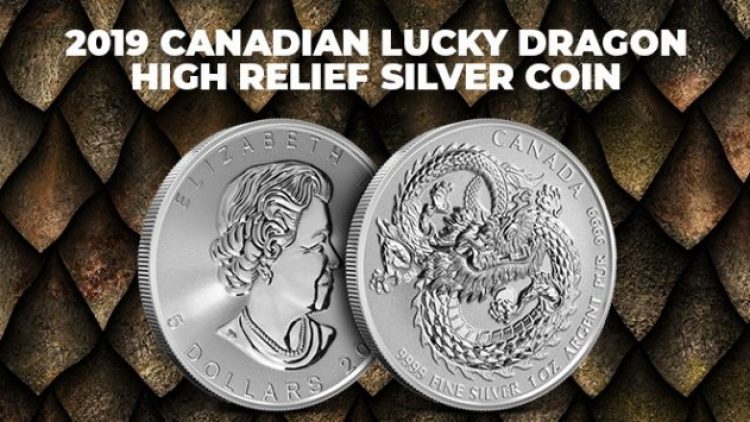 There are countless symbols of good luck and fortune in the world. Many of these we are already familiar with, such as the lucky four-leaf clover originating from Irish society or the simple belief that getting the bigger half of a wishbone in the break means a wish comes true. In Chinese culture, there a variety of numbers that represent good luck and nine kinds of dragons that can be combined with other creatures for additional symbols of good luck. As an example, the 2019 Canadian Lucky Dragon High Relief coin features two signs of good luck in a singular design from the Royal Canadian Mint. 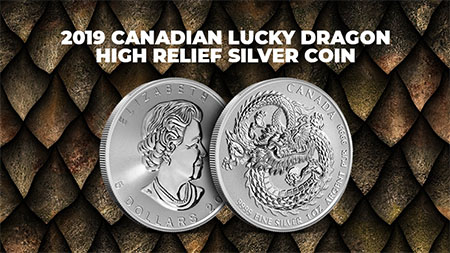 The reverse face of the 2019 Canadian Lucky Dragon High Relief 1 oz Silver Coin features an image first introduced by the Royal Canadian Mint in 2017. Two of the most beloved symbols of luck and good fortune in Chinese culture are the number eight and the dragon, both of which are combined into a single image on the reverse of these silver coins. The Chinese dragon differs from Western designs of dragons, lacking wings and having the body of a serpent. This Chinese dragon uses that long, slithering body to contort itself into the shape of the number eight. The dragon has four clawed feet, with one of the front feet of the beast clutching a pearl. Inscriptions on this face of the coin include “Canada” and “9999 Fine Silver 1 oz Argent Pur 9999.” Another inscription of “SN” is found near the top of the dragon’s eight shape and represents the designer, Simon Ng.

On the obverse side of the 2019 Canadian Lucky Dragon Silver Coins is an effigy of Queen Elizabeth II. Designed in 2003 by Susanna Blunt, this is the fourth-generation portrait of the Queen used on Canadian coins. The bust of the Queen shown here lacks a crown, instead showing the Queen with only a modest pair of earrings and a necklace. The background field has the Royal Canadian Mint’s background field of radial lines with inscriptions above that read “Elizabeth II” and below that read “5 Dollars 2019.” This portrait of the Queen is the first monarch portrait on Canadian coins since the reign of King George VI, her father, to show the monarch without a crown. It is also just the second portrait for Canadian denominations designed by a Canadian artist.

The Royal Canadian Mint’s 2019 Canadian Lucky Dragon High Relief 1 oz Silver Coins are available without a mintage cap applied to the release. The coins have 1 Troy oz of .9999 pure silver with a face value of $5 (CAD) fully backed by the Canadian government. Individual coins in this series are shipped with protective plastic flips, while multiples of 25 coins are available in mint tubes. All coins are struck in high relief, a process that involves striking the silver blanks several times with greater pressure in the coining press. The result is a coin with enhanced visual depth for the design elements on the surfaces of the coin.

History of Chinese Symbols of Luck

There are said to be nine dragons in Chinese culture, with the Red Dragon, in particular, seen as a symbol of luck and prosperity. The dragon is often combined with other mythical beasts in Chinese artwork to form other symbols of good fortune, such as the dragon and phoenix representing a happy marriage. Another example would be the Turtle dragon that symbolizes wealth, career success, and a long life. When it comes to numbers, all even numbers are seen as being more auspicious than odd numbers. In particular, the number eight is seen as the luckiest numbers because its pronunciation in Chinese sounds very similar to the word for fortune. The 2019 Canadian Lucky Dragon Silver Coin’s design from Simon Ng combines these two powerful symbols of luck into one impressive image.

Get Your Canadian Lucky Dragon from Provident Metals

The Canadian Lucky Dragon Silver Coins are available right now from Provident Metals. Our team is available to assist you with any questions at 800-313-3315, online through our live chat, and via our email address. We encourage you to read our blog each week and follow us on social media for regular updates.